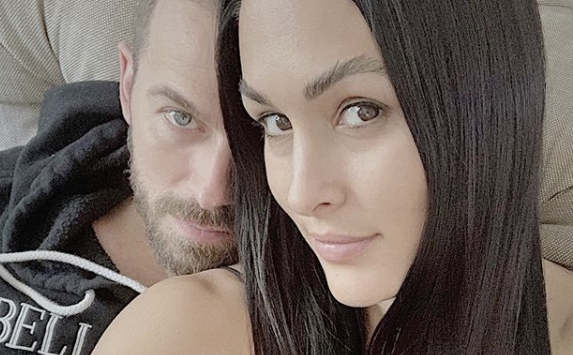 Nikki Bella said that she and her fiance Artem Chigvintsev are headed to couple’s counseling as soon as Dancing With The Stars is over for the year. However, it seems like the pair are trying really hard to work on themselves. Nikki and her sister Brie celebrated their 37th birthdays over the weekend, and Artem had something sweet to say.

“I want to wish the happiest birthday to my beautiful and definitely better other half you are my rock, you have been absolutely incredible as a mom to Matteo and I am so lucky to have you,” the dancer began in a touching Instagram post. Even though they’re apart, there’s no love lost between them.

“I want to wish you lots of success, love and happiness and everything you wish for your self [sic]. I love you and miss you and can’t wait to see you to celebrate,” he concluded.

Artem is in Los Angeles right now to finish out this season of Dancing With The Stars. But the finale is tonight, and he can be with his family again afterward. If he and his partner Kaitlyn Bristowe take home this Mirrorball Trophy tonight, this will be Artem’s first win.

Want to Congratulate all the other finalists, it’s come round so fast, but here we all are at the Finale of @dancingabc 🙌🏼
Let’s make it a fantastic night! 👏🏼 👏🏼
Let’s go @kaitlynbristowe ! 💃🏼🕺🏼 #dwtsfinale #dwts pic.twitter.com/7gjciv01ad

Artem Chigvintsev Struggled With The Separation From His Family

Even from the start of the season, Artem missed Nikki and their baby son, Matteo. He’s really happy to be back in the ballroom, but it’s been rough being apart from his family in Phoenix. Nikki said on The Bellas Podcast that it’s been hard on her too. Taking care of a newborn all by yourself definitely isn’t an easy task.

“After Dancing, we’re going to start classes as a couple because we’ve realized that we both feel like we’re not listening to each other,” Nikki admitted to Us Weekly. “We finally both just said, like, ‘We need to bring someone in to help us so we don’t get [back] into that place.’”

Nikki Bella struggles with postpartum depression but wasn’t sure how to speak up about her feelings. Her sister Brie eventually approached Artem about the situation. Once everything was out in the open, things became easier.

“I just told him, like, ‘I need more attention from you,’ and that is something we’ve worked on, and that’s gotten better,” the Total Bellas star told Us Weekly. “Artem and I have great communication, but it’s been lacking, but that’s something that we’ve been so strong about in our relationship [in the past].”

Hopefully after tonight, the couple will be able to rekindle their flame.

Tune in to Dancing With The Stars tonight to see Artem Chigvintsev and Kaitlyn Bristowe battle it out for the Mirrorball Trophy. Will you be watching? Let us know in the comments. Don’t forget to vote if you want them to win! Your votes will help take them straight to the top.

‘Bold and the Beautiful’: Steffy’s Battle Cry – ‘Nothing Ugly About This Baby’
‘Unexpected’ Preview: Tyra Returns From College, Ditches BF Alex
Deavan Clegg Responds To Fans Dragging Her Over New Look
Amy Roloff Making Great Strides Towards Getting Fit For Wedding
Who Is On The Latest Spinoff ’90 Day: The Single Life’ On Discovery+? [TEASER]