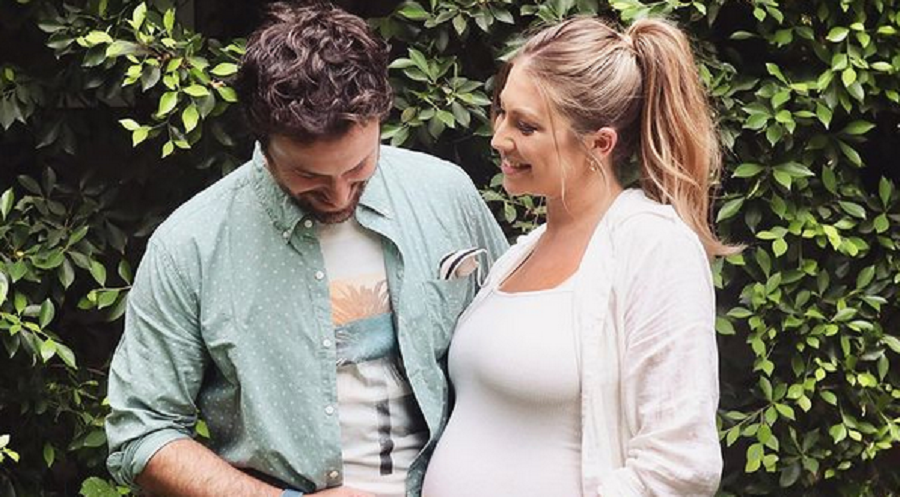 Stassi Schroeder has been open and honest about her pregnancy journey. The Vanderpump Rules alum has been candidly sharing for the past five months. Ever since she announced in June she’s giving birth, she’s been sharing regular baby bump photos. Stassi and her husband, Beau Clark, have a baby girl on the way.

She’s supposed to arrive sometime in January 2021. But Stassi is concerned that her baby could come sooner. She shared her thoughts on Instagram Stories over the weekend with a new baby bump photo. This comes after Stassi revealed that her baby girl had a hole in her heart.

Over the weekend, Stassi Schroeder shared a bathroom selfie featuring her baby bump. She asked her followers what it means. In the photo, Stassi pulled up her gray hooded sweatshirt to show off her stomach. Also on display were her beauty products in her bathroom.

“Baby feels lower and I can breathe better today,” she wrote. “What does this mean.”

The former Bravo star received responses. She joked that she was a little concerned about some of the answers she received.

“Everyone is saying baby is getting into position,” Stassi added in a follow-up Instagram Story. “Need her to stay in because I was seriously looking forward to birthing a Capricorn. Lol.”

The astrological sign’s dates start on December 22 and end on January 19. At 33 weeks pregnant, Stassi is due to give birth sometime in the next two months. Stassi is unsure of some of the changes that are taking place with her body. However, it’s normal for new moms to feel concerned about the birth of their first baby.

Just days earlier, Stassi revealed that she couldn’t breathe. She took to her Instagram Stories to share a pouty photo. The “Straight Up With Stassi” host wore a light gray turtleneck, which she bunched up to show off her belly.

“I can’t breathe, I can’t roll over, I can’t go to the bathroom, I’m out of breath from lying down, heartburn is making puke come up in my mouth,” Stassi wrote in the photo. “I feel like my stomach is actually going to explode. Someone pop me.”

However, shortness of breath is common among pregnant women. Between 32 and 28 weeks is when the baby prepares itself for birth, according to What to Expect. As TV Shows Ace previously reported, Stassi and Beau took an exciting trip to Target. It was their first time shopping “in over nine months.”

Stassi Schroeder talks about the joys of pregnancy

She recently reunited with her former Vanderpump Rules castmates Brittany Cartwright and Lala Kent to talk about motherhood. Stassi Schroeder talked about her body’s changes on Lala’s podcast “Give Them Lala With Randall.” The three pregnant moms also compared their pregnancy symptoms and discussed “bump shaming,” which all of them have witnessed on social media.

But there is an upside to being pregnant. Stassi revealed her favorite part of being pregnant. And it’s not carrying her child. In fact, it has something to do with Beau.

“My favorite part about being pregnant is seeing your significant other talk about the future and talk about what the baby’s gonna be like and how they’re gonna parent,” Stassi exclaimed. “I can’t imagine when she actually gets here watching him with her.”

Check back with TV Shows Ace for the latest news on Stassi’s pregnancy.