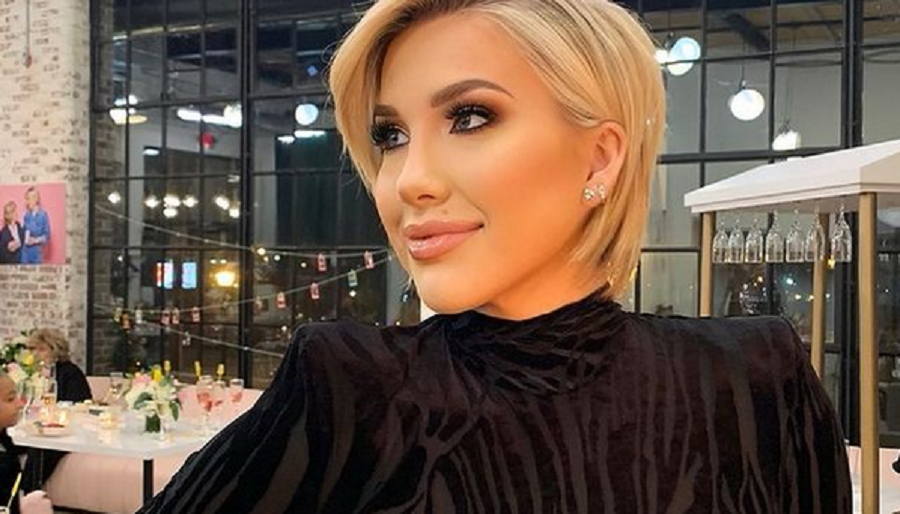 Savannah Chrisley usually laughs things off. She has a good sense of humor about everything. She recently laughed off the romance rumors. Savannah has to constantly remind her followers that she’s not dating her best friend Chadd Bryant.

However, that hasn’t stopped her followers from speculating about her dating life. But nowadays, Savannah is focusing on her love of fashion and beauty. She launched her Sassy Cosmetics line. In honor of her new venture, she’s been playing dress-up on social media.

It hasn’t been easy though. Savannah had to deal with a wardrobe malfunction that took place on Instagram.

Savannah Chrisley splits her jumpsuit “down the crotch”

The Chrisley Knows Best star often appears poised and perfect on and off the show. But even she deals with a wardrobe malfunction every so often. On Thursday, November 22, the 23-year-old took to her Instagram Stories to share about her embarrassing mishap. In the clip, Savannah Chrisley wore an olive green jumpsuit.

The reality star showed off her incredible body in the form-fitting one-piece outfit. She told her followers that her look isn’t as perfect as it looks. The jumpsuit showed off her tiny waist. Savannah kept the top buttons unbuttoned and popped the collar. She also wore a full face of makeup from her Sassy by Savannah cosmetics line.

The Southerner called all “tall girls” and explained the mishap she had. She panned the camera to herself as she showed off her 5’7″ frame. Savannah joked that only “tall girls, you will understand.” While laughing she revealed that she owns the same jumpsuit in another color.

With a laugh, she held up the same jumpsuit. “I went to tie my shoes and, well, it split right down the crotch,” Savannah explained. She revealed that being tall is not as great as it sounds.

“So, my tall girls, you know the pain. It is not fun sometimes,” Savannah continued. “Let’s just hope this one doesn’t split.”

Savannah Chrisley is getting daring with her fashion choices. Fans noticed that she’s been working on her post-breakup body. Back in September, she ended her relationship with her fiance Nic Kerdiles. The two dated for three years and survived a failed engagement, but wanted to work on their relationship.

Savannah wore one of her most daring looks yet on Instagram. On Saturday night, November 22, she took to social media to promote the Alexa Nicole Collection. The brand sent Savannah a sweater, silk satin loungewear, and a sheer white lace shirt. Savannah posed in some of the clothes and admitted that she’s a “huge supporter of women-owned businesses.”

When she held up the sheer blouse, she said, “This…. ah…. honestly, it’s kinda outside my comfort zone,” before adding, “I am so excited to give it a try.”

Savannah didn’t feel comfortable with wearing the sheer blouse. She told her followers that she’s a “nice Christian girl.” But that didn’t stop her before. The Blast previously reported that Savannah wore a black semi-sheer dress that showed her bra. Some of her fans begged her to stop looking like a Kardashian.

What are your thoughts on Savannah’s looks? Sound off below in the comments section.