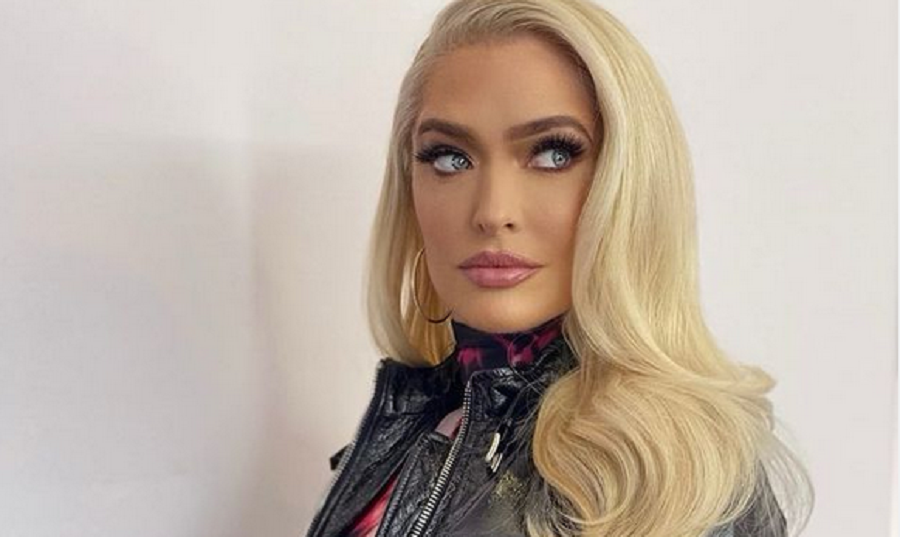 Erika Jayne is moving on. TV Shows Ace previously reported that The Real Housewives of Beverly Hills star posted a series of sizzling photos on Instagram. She made it clear that she’s single and ready to mingle. Earlier this month, Erika announced her split from attorney Tom Girardi.

She wants her followers to know that she’s moving past their marriage. Erika ditched her wedding ring in her latest Instagram photo. This comes just weeks after their divorce announcement. The 49-year-old literally flaunted her wedding finger for everyone to see. With just a snap of a photo, she confirmed that she’s divorcing her husband of 21 years.

On Saturday, November 21, Erika Jayne waved away the haters. She posted a new photo on Instagram. She didn’t look like her usual glamorous self. Instead, Erika was cool, confident, and casual. She wore a black athletic jacket that featured white stripes. As she tossed her blonde hair aside, she showed off her naked hand where her wedding ring would be.

Erika dropped the new photo without a caption. She made it clear that she’s no longer a married woman. Her new post received over 61,000 likes within 22 hours. Most of Erika’s followers showed their support for her new look. They immediately flocked to the comments section.

“That’s right queen! Flip your hair and leave your past in the past!” one fan wrote. “Your fans are here for you❤️.”

“Show them queen!” a second one added.

Erika has been busy posting shots on Instagram. On Thursday, November 19, she shared this stunning shot of herself in an olive green anorak. This time, Erika wore her hair down with a braid around the crown. She also showed off a full face of makeup and diamond earrings.

That snapshot received over 87,000 likes and over thousands of comments. Erika’s fans have been liking her new looks lately. The 49-year-old reality star is reminding everyone that she’s still got it.

Erika Jayne has been enjoying her newly single status. She’s reportedly “thriving” since her divorce. She’s allegedly not living in her Los Angeles mansion that she once shared with Tom. According to previous reports, she now resides in a one-bedroom, two-bathroom apartment that costs $7K per month.

As TV Shows Ace previously reported, Erika filed for divorce from the Los Angeles attorney earlier this month. This comes after 20 years of marriage. Fans were shocked to learn about their divorce. The previous seasons of RHOBH didn’t show any cracks in their relationship.

Instead, Erika often defended their marriage. She didn’t like it when people like new co-star Garcelle Beauvais asked about her intimate life with Tom. Erika said that people should try their own 20-year age-gap relationship if they want to know how it feels.

What are your thoughts on Erika’s new Instagram photos? Sound off below in the comments section.

‘DWTS’ Pro Emma Slater Discusses Tyra Banks’ On-Stage Performance
Paris Hilton Joining ‘RHOBH’ Would Be ‘Hunky Dory’ With Fans, But Will She? Kathy Spills All
Heather Locklear To Star In ‘Don’t Sweat The Small Stuff’ Lifetime Movie
Danielle Busby SCRAMBLES, Overwhelmed With Last-Minute Packing
Chrishell Stause Vacations In Paradise With Her New Man — Who Is It?