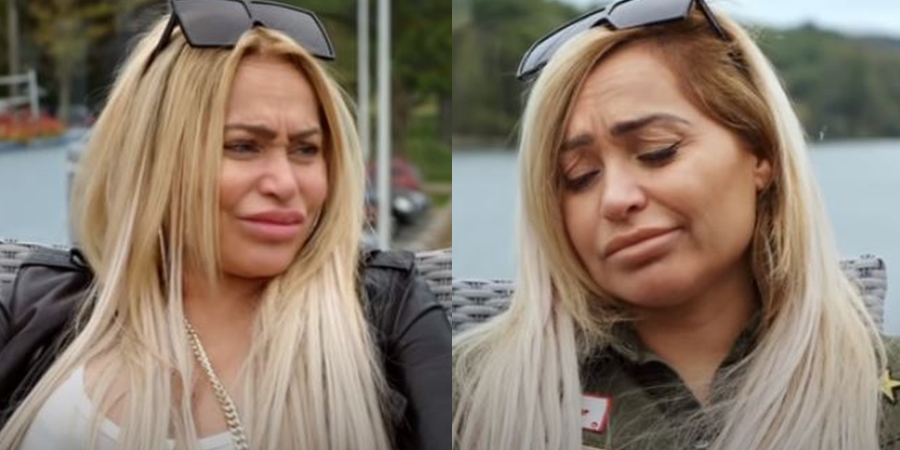 Darcey and Stacey Silva often twin with their clothing and hairstyles. Well, they actually are twins, and that makes people interested in their love stories on 90 Day Fiance. But now a photo emerged of them standing next to each other wearing ripped jeans, tiny tops and masks. Immediately, critics ripped into them over the ripped jeans.

Darcey and Stacey look like a ‘raccoon’ ate their jeans

When Darcey and Stacey received a nomination for a People’s Choice Award, we reported some critics slammed them. Many fans think there’s just way too much flashing of their cleavage. Others feel they try dressing like teenagers. And others think they become rather more scripted than usual on TLC. So, the two women probably grow used to trolls. However, that never stopped them from dressing just any way they please.

On the weekend, @90daythemelanatedway on Instagram shared a photo of the two women. Darcey and Stacey stood together in what looked like a tavern. And they both wore skimpy tops and ripped jeans. The problem for critics is that there seemed to be more rip than denim. In fact, one fan said it looked like “a raccoon ate those jeans.” Other critics didn’t like the tiny tops and obvious chest-flaunting. But, most people complained about the jeans.

Too old for ripped jeans?

90 Day Fiance fans slammed the twin sisters, suggesting they’re way too “old” for ripped jeans. One of them commented, “If your (sic) a teen those jeans look cute not on these two. I wish they would grow up.” And another person noted, “To old to wear those torn jeans.” Actually, a lot of people made similar comments. So, one follower wished they’d read the comments.

That person said that if Darcey and Stacey took advice from fans, “they would be a lot more beautiful.” Plus, they suggested the Silva twins “tone everything down and cover up not show it all.” And others felt they should wear looser clothing, saying that their entire outfit looks way “too tight.” Actually, other TLC critics remembered that these women both have teenagers. “Some people need to grow up and act their age. They both have teenagers. So cringeworthy,” said one comment.

Afraid of aging some fans think

While a lot of critics slam them for wearing tight clothes and ripped jeans, someone else suggested that they fear aging. Perhaps they think if they use botox and dress in clothes better suited to teens, they stay young at heart. And that might hold true. Bright Side notes that in modern society, “being young is something that people worship and signs of aging are something to be ashamed of.”

Darcey and Stacey might hide their fine lines and wrinkles because of that. And interestingly, the outlet notes that people who hide their age is exacerbated by companies who make money off it. They said, “if you don’t do botox injections, you don’t care about yourself, and if you do, you look like a plastic doll.” Caught in a hard place, the 90 Day Fiance stars possibly dress young to keep viewers coming back for more of them on TV.