It may be the fastest love story in Bachelor history and fans are loving it.  Clare Crawley got a lot of criticism when her season first aired. However, fans are now cheering her and Dale Moss on. And, anyone can look at these two together and see how deep their feelings are for one another. They are already engaged, however, they currently reside on opposite sides of the country. So, they are looking to fix that. In fact, Clare and Dale shared with fans they are house hunting this weekend.

Clare Crawley and Dale Moss take it to the next level

Clare and Dale went to Instagram to share they are taking their relationship to yet a new level. Dale had been in New York working, but flew into Sacramento a few days ago. Now, the two are sharing that they are house hunting this weekend.

In fact, Clare shared a Instagram Story of one of the places they were looking at. And, to bump it up another notch, they were shopping for a new washer and dryer. These two are obviously in love and ready to spend their future together.

Dale knows how important it is for Clare to be in Sacramento near her mom. So, he is taking a leap of faith and moving there to be with her. He sounds like a keeper! 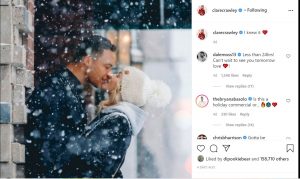 Plans for the upcoming Thanksgiving holiday

And, Clare and Dale aren’t letting rumors get them down. Yes, rumors have already been swirling that Dale was unfaithful to Clare while working a modeling job in New York. She trusts him and he said absolutely nothing happened. Having a relationship in the public eye will definitely allow a lot of speculation from outside parties stirring the pot.

So, they continue to move forward with planning their future together. And, this includes Thanksgiving with each other’s families. Clare and Dale will reportedly be spending Thanksgiving in San Diego with friends and families from both sides.

No announcement has surfaced about possible wedding dates just yet. But, as fast as they fell in love, perhaps they are wanting to marry quickly as well. Of course that is just speculation. They are definitely not wasting any time in wanting to find a place to call home together.

As far as all the rumors, Clare and Dale are both brushing them off. They are obviously smitten with each other and there is no doubt they will be together for a very long time.

‘General Hospital’ Spoilers, August 2-6, 2021: What Is Austin Up To?
‘The Young and the Restless’ Spoilers, August 2-6: Phyllis Gets Everything She Needs
‘Y&R’ Spoilers: FINALLY! Kyle And Jack See The Truth – Phyllis Was Right
‘Return To Amish’ Rosanna Miller Officially Confirms Pregnancy- See Her Bump
Clare Crawley Underwent Breast Implant Removal Surgery, How Is She?