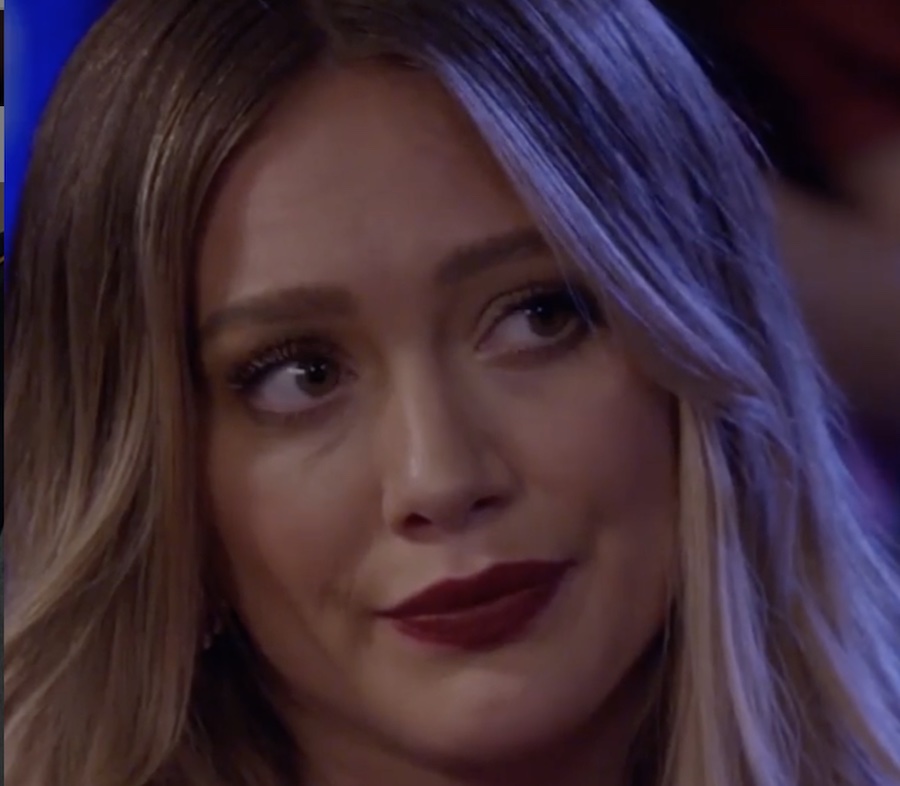 On Saturday, Hilary Duff shared some distressing news regarding Covid-19. Currently, she is filming Younger Season 7 in New York City. What do we know about her situation and what is happening with the final season of the TV Land series?

On Saturday, Hilary Duff went to Instagram to reveal that she has been exposed to Covid-19. The 33-year-old Younger star shared a selfie. In the photo, her expression was unhappy. Her caption, “Exposed to covid Quarantine day 2 Fml.”

She also shared a second photo of her holding a book to her chest. The caption says, “Just me and Cazzie, Cazzie and I.” The book title is No One Asked For This: Essays, by Cazzie David. They published this book of essays on November 17. Cazzie is Larry David’s talented daughter. Cazzie David has published her essays in many prestigious journals.

Good thing Hilary is such a veracious reader. Sounds like she now has plenty of time just hanging with the essays, and not with her family, who all came to New York for the the Younger shoot. She is only on day 2, of what we can assume will be a standard 14-day quarantine. Unfortunately, this also means missing Thanksgiving and perhaps more.

Moreover, in October, Hilary announced that she, and her husband Matthew Koma were expecting a baby. This will be her third child, second with Koma. The couple had Banks Violet in 2018. In addition, Duff and first husband, former NHLer Mike Comrie, are parents to 8-year-old son Luca Cruz.

She had shared on Instagram, “We are growing!!! Mostly me …”

How Did Hilary Duff Get Exposed?

Now the question on everyone’s mind is whether Hilary was exposed to Covid while filming Younger Season 7 in New York. Earlier this week, Hilary Duff and Sutton Foster were filming outdoor scenes. Just like other sets around the world, when they were not filming, they wore face masks. They only took them off when they were filming.

According to People, they tried to contact the Younger reps on any official news. They have been unsuccessful in reaching the contacts.

We cannot assume that Hilary Duff got Covid on set. Right now, no one else from the cast has posted anything about being in quarantine. Did Hilary come into contact with someone outside of the Younger set?

The "Lizzie McGuire" vet shared a sullen selfie alongside the news. (via @toofab) https://t.co/CfQfKzppPD

Currently, Hilary Duff is in New York to film the final season of Younger. Season 7 should have started filming back in March. Unfortunately, that is when the pandemic hit New York City hard. In addition, Hilary’s costar Debi Mazar got Covid, and was quite ill for a couple of weeks.

Have they delayed filming Younger Season 7?  Hopefully, fans will get answers soon.

Mady Gosselin Defends Risqué Photo: ‘I’ll Do Whatever I Want’
Paris Hilton Joining ‘RHOBH’ Would Be ‘Hunky Dory’ With Fans, But Will She? Kathy Spills All
Chase Chrisley Enjoys Donut Date With Nanny Faye: See Photo
Savannah Chrisley‘s Latest Project DRAGGED For Lack Of Plus Sizes
Jeremy Vuolo Goes Back To College & Back To His Roots