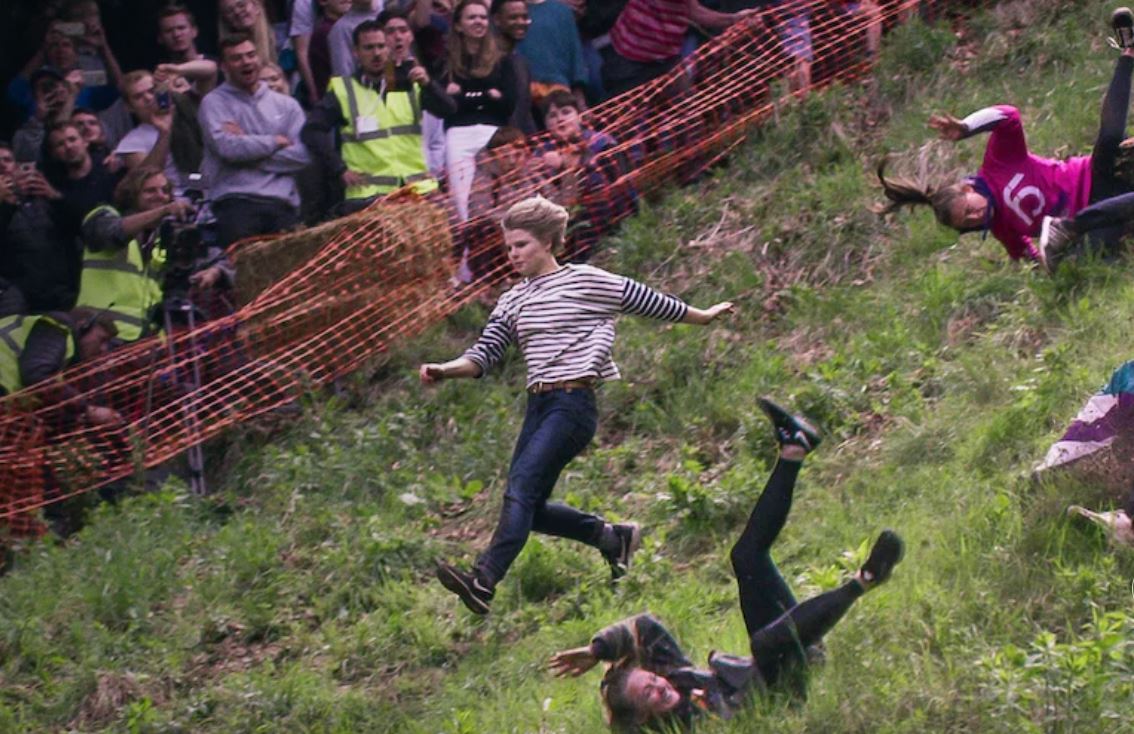 Netflix has released a quirky six parter called We Are The Champions that celebrates the off-the-beaten path to glory and bragging rights for folks who are drawn to unusual pastimes, from eating hot chillies to styling absurd hairdos to dancing dogs.

But the Gloucestershire township of Brockworth’s cheese rolling documentary truly stands alone.  The English adore their cheese and will chase after a runaway wheel of the town’s esteemed double cream Gloucester cheese gussied up in blue and red ribbons and safely well taped by the town elders.

Meanwhile all ages and levels of fitness gather up to careen down Cooper’s Hill, a death drop steep incline where ambulances await the many losers in hot pursuit of the elusive wheel. It’s glorious and one of the best and utterly bonkers shows of late I have ever seen.

The upshot is a young woman has defied the odds mightily and she has inspired other girls to follow in her footsteps.

About the Champions documentary set in Brockworth

The annual athletically bent race at Cooper’s Hill is painted by the filmmakers as the “world’s most dangerous footrace.” The narration by Rainn Wilson (Dwight Schrute from The Office) is spot on and perfect for the insanity that ensues.

Traditions are a way of honoring the past in a set language they created. But what about the broken limbs? Cracked skulls? Popped knees and concussions? The bygone era of wild abandon in the desire to catch up to a spinning cheese wheel on the move happened when people usually had to have a minor injury amputated by hacksaw or have leeches applied by a primitive medic.

Cut to today and this quirky English event still occurs, although the injuries wind up being tended to inside a proper hospital.

Netflix takes us to Gloucestershire where cheese rolling is a beloved sport-meets-obsession. One woman—Florence Early—has achieved lofty heights of winning, and in the process has cacked up her collarbone and broken her foot in chasing the wild cheese.

Every year the event, according to event coordinator-slash-pub owner Sara Stevens, brings all sorts out chasing the wheel of cheese that clocks over 80 MPH.  Sara does all this “unofficial” organizing for free, and she even was injured by the hurtling cheese and sent to the hospital. It’s a very good and convenient thing that they have free healthcare in England, which is the takeaway here.

If the Wisconsin cheese board had a similar contest with similar results there would be untold lawsuits, and bankruptcies from the emergency room visits from Yankee cheeseheads in it to win it.

What can you say about chasing a wheel of cheese…other than it is a fun to watch segment that illuminates the charm of Brockworth as it frames the lush rolling English countryside as a desirable tourist destination, if we ever can leave our homes again.

Double Gloucester Cheese is the inadvertent star of this Netflix effort and you will find yourself looking for it in your fancy cheese section of the grocery store.  Most networks send TV writers lovely food gifts and I’m really shocked that I did not receive a wheel of cheese to call my own and to roll down The Old Hill “hill” of Old Hill Road here in Boise. Not quite as steep as Cooper’s Hill yet that would have made the local news here in the City of Trees, nonetheless.

Undoubtedly the human interest part of the doc is the saga of Florence Early and her young understudy, Kacie Anderson.

Florence took the win at the age of 17, and was born to do it as we learn in b roll of her tomboy youth where anything he could do she would do better.

Kacie is the relative of one of the male cheese champions and she feels that it is time for more girls to step it up in the cheese chasing world. You go, Kacie!

We Are The Champions is more than just this mesmerizing cheese documentary. It is a six-part documentary that explores the “quirkiest, most charming, and oddly inspirational competitions you never knew existed”, according to the network.  The first episode follows the Cooper’s Hill Cheese Rolling, with other installments that include a sadistic/masochistic Chili Eating contest, and Fantasy Hairstyling, Yo-Yo, Dog Dancing, and Frog Dancing.

But trust me when I tell you that this cheese episode takes the cake.

“We Are the Champions” is now available to stream on Netflix.

Mady Gosselin Defends Risqué Photo: ‘I’ll Do Whatever I Want’
Kailyn Lowry Reveals What Is Affecting Her Whole Family Now, Even Javi
Isabel Roloff Shares Adorable Snap Of Her Finding Out She Was Pregnant
’90 Day Fiance: The Other Way’ Spoilers: Did Ellie & Victor Break Up?!
Wells Adams Blames Ben Higgins For Latest ‘Bachelorette’ Debacle