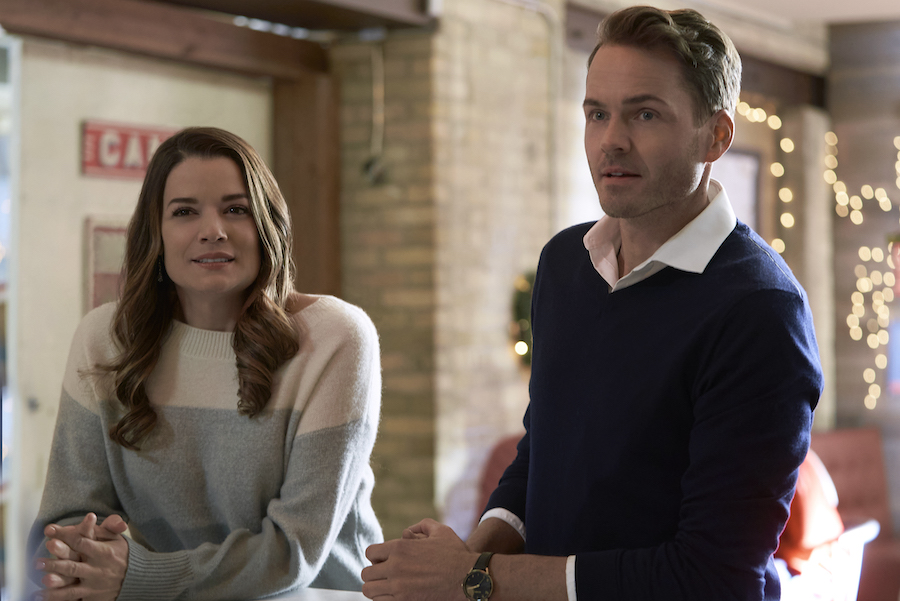 This is a fun Christmas movie, with snappy dialogue, laughter and plenty of holiday spirit.

What Is Hallmark’s Christmas By Starlight About?

According to the Hallmark press release, Annie Park (Sustad) is a savvy lawyer. Adopted herself, her specialty is in child adoptions. However, she is now on a different sort of project. Her  family’s local eatery, The Starlight Café, has been scheduled to be torn down, in order to create new development. A clever lawyer, Annie is not afraid to do what she must to stop the developers.

Enter William Holt (Campbell). He is the heir to the development firm. Described as “free-wheeling,” Will sees an opportunity to help out Annie, if she helps him out of a jam. His demanding father wants him to hire an attorney to deal with some very careless mistakes made.

Will wants his dad off his back, at least for a week, so he wants Annie to deal with this crisis. In turn, he’ll spare the café. But Annie needs to appear as “stringent legal counsel.” Of course, she agrees. This café means the world to her folks and the entire neighborhood. They are counting on her.

As Annie tends to overcommit, it is of no surprise that she suggests that they put Will’s company’s spectacular fundraising event at the Starlight. Now, Will is forcing her to make it all happen, although she has no clue as to what to do.

Part of the reason is that Will and Annie live in two totally different worlds. So, Will is forced to help her out. But, opposites attract, and sparks fly. And, it turn out, they are not that different from each other after all.

The two first starred in the 2018 Hallmark Christmas movie, A Godwink Christmas. They were reunited in 2020 in Wedding Every Weekend. Somewhere in there, Kimberley Sustad shared her idea for a Christmas story. Together they plotted it, and Paul Campbell wrote the screenplay.

Based on the preview trailer, there is a lot of fun banter, Paul’s infamous humor and tons of chemistry. This looks like more than a normal Christmas movie. This is the romcom people want this holiday season.

One thing that Kimberley, and Hallmark fans learn in this movie that Paul Campbell cannot skate in real life. Yes, he is Canadian, and no, his folks didn’t put skates on his feet the day after he walked his first steps.

It should be noted that this is the second Hallmark movie, this season, written by the lead actor. Alicia Witt wrote the story for Christmas Tree Lane, that is currently airing on Hallmark Movies & Mysteries. The third is The Christmas House, written by Robert Buckley. This movie is based on his own family’s Christmas traditions. This movie premieres on Sunday, November 22, on the Hallmark Channel.

When Can You Watch Hallmark’s Christmas By Starlight?

Don’t forget to hop onto Twitter during the premiere showing. Hallmark and the stars of each movie have been live tweeting. This is a great opportunity to let them know what your favorite scene is, or to ask questions.

Be sure to catch the premiere of Christmas By Starlight, on Thursday, November 26, at 8 p.m. Eastern.

Nick Viall Shares Dating Advice With Fans On Instagram
Jedidiah Duggar Packs On The Pounds, Katey Nakatsu To Blame?
Savannah Chrisley Puts Sun-Kissed Legs On Display In Sizzling Snap
‘LPBW’ Tough Jackson Roloff Shows Dad What He Is Made Of
Meri Brown Gets Cryptic About ‘Being Broken,’ Is She Alright?