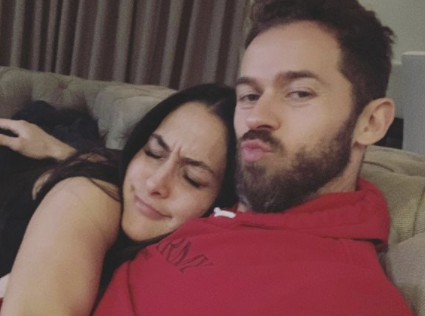 Total Bellas star Nikki Bella has a horse in the Dancing With The Stars race. Her fiance Artem Chigvintsev and his celebrity partner Kaitlyn Bristowe are in the final four. This Monday, they will compete against the other three couples for the Mirrorball Trophy. And if they don’t win, Nikki says the show is definitely rigged.

Brie and Nikki Bella Discuss It All On Their Podcast

Nikki and her sister Brie sat down to discuss the situation on The Bellas Podcast.

“A part of the Dancing With the Stars show that I think people get really attached to someone is when they see their growth. I truly believe Carrie Ann was hard on her because she knew there was more and we saw that last week,” Nikki said, referencing Artem’s tiff with Carrie Ann. “They got three 10s. That Argentine tango, you were like I didn’t even think she could do that and she did that. And so for me, that’s how I see things. Like Carrie Ann pushed her in a way that made her even better. Honestly if Kaitlyn and Artem don’t win, I’m calling, it’s rigged.”

Brie suggested that Nev Schulman and Jenna Johnson had a great shot at first place too. But Nikki disagreed. She argued Kaitlyn and Artem have grown more and therefore deserve the trophy more.

#TeamWillYouAcceptThisDance is hoping to pocket the Mirrorball Trophy next Monday! Send them words of encouragement in the comments. #Finale #DWTS pic.twitter.com/SSZcbFCCoH

Nikki Actually Took Carrie Ann’s Side In The Feud

Artem and Kaitlyn are definitely fan-favorites this year. They had a bit of a disagreement with judge Carrie Ann Inaba. Of course, the fanbase took Kaitlyn and Artem’s side. But Nikki Bella actually sided with Carrie Ann. Unfortunately, she got a lot of pushback from fans.

“For the women [fans] who thought I should have my man’s back, I would take a bullet for that man,” Nikki said on the podcast. “I love that man and we both have chosen to be in the reality world, we put our life out there so when you all said if it isn’t good I shouldn’t talk about it, no. I talk about the good, the bad, the ugly. And by the way, there was no bad in that. He actually agreed.”

The Couple Plans To Take Some Alone Time Soon

As soon as Dancing With The Stars ends on Monday, Nikki and Artem will be spending some much-needed quality time together. The Total Bellas star admitted DWTS has taken a toll on their relationship and they’ll be heading to couple’s counseling.  Every couple fights from time to time, and it’s really refreshing that they’ve decided to work on it instead of ending things.

The Dancing With The Stars Season 29 finale is Monday night at 8 PM eastern time. Will you tune in? Are you cheering for Artem and Kaitlyn? Let us know in the comments. We’re always interested in hearing from you.

Meri Brown Gets Cryptic About ‘Being Broken,’ Is She Alright?
Kyle Richards Calls Out Lisa Vanderpump: ‘Give It A Rest’
Derek Hough Dishes On His Relationship With Hayley Erbert
Jenelle Evans Reveals Petty Details Of Split From Nathan Griffith
RHOBH’s Lisa Rinna Argues Daughter Amelia Gray’s Lips Are Natural