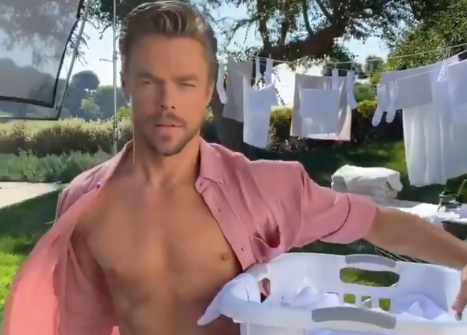 One of our favorite Dancing With The Stars alums is featured in PEOPLE‘s Sexiest Man Alive issue. In the spread, new judge Derek Hough can be seen doing laundry with his shirt undone, out in the great outdoors. But in real life, Derek says his laundry skills are subpar at best.

“My laundry skills? On a scale between zero and 10, I would give myself a negative one,” the 34-year-old dancer admitted to PEOPLE. “I’m good at folding though! I love actually cleaning up the house and I love yard work. I’m an outdoor yard work guy every single day, but laundry, it’s not my game.”

Derek’s girlfriend, Hayley Erbert, called in the middle of the interview. So he asked for her input.

“I would rate that a zero,” Hayley said over speakerphone.

“If laundry was outside, I probably would do it more often because I love the outdoors,” Derek joked.

I have skills around the house but laundry 🧺 ? Well, @hayley.erbert said it 😂 @people https://t.co/o9UeIyWRzX

Derek Hough Is Enjoying Life With His Girlfriend During Quarantine

The professional dancer went on to say that during the pandemic, he’s taken some time to slow down and learn how to not be busy all the time.

“…I’ve learned I can actually just relax and be home and do chores and do arts and crafts and just kind of fun things, learn how to cook with my girlfriend. I’m a great sous-chef!” he added. Derek and Hayley even started their own YouTube channel during the pandemic. It’s pretty entertaining if you haven’t seen it yet.

Life in quarantine together has taken a heavy toll on many couples, but Derek and Hayley really seem to be happy and doing well together. They even performed on Dancing With The Stars in a special performance a few weeks ago.

What’s In Store For The Finale?

Fans couldn’t get enough of Derek Hough and Hayley Erbert’s firey Paso Doble. Now, Derek plans to have a solo performance during the series finale.

“I am dancing by myself and I am not sure why I decided to, but I am doing it. I have not danced a solo since I was, like, 12 years old, that is the truth. So here we go!” the newest judge told ET. He really wanted to do a group number, but the Coronavirus pandemic really put a damper on those plans. But in any case, fans are confident Derek has what it takes to blow fans away.

Are you excited to see the finale? Tune in to ABC at 8 PM eastern time on Monday night. You’ll get to see Derek Hough’s amazing performance and see the final four couples compete for the Mirrorball Trophy. And don’t forget to pick up your very own issue of PEOPLE‘s Sexiest Man Alive issue. Show Derek your support!