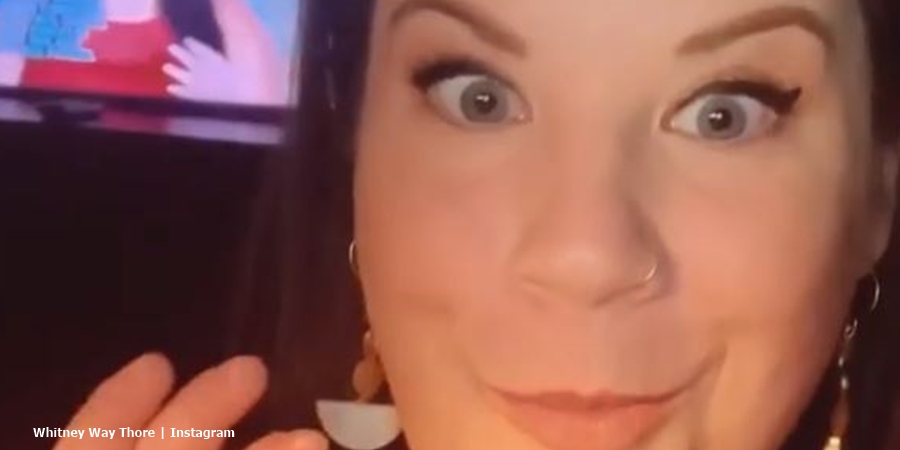 Whitney Way Thore returned in Season 8 of My Big Fat Fabulous Life on November 17. This year, no big premiere party came along for the TLC star. And that probably relates to the coronavirus. So instead, she took to her Instagram and shared how she celebrated the premiere. But a suspected Debbie Downer came along and ended up getting slammed by Whitney.

Whitney Way Thore jokes about a premiere party for MBFFL

On November 18, Whitney posted a small video clip on Instagram. She looked happy as she turned on her TV. Then, she said that people who watch TV probably wonder what it’s like and what people do. And, she talked in questions about flashy “parties” and “red carpets” and well-wishers? However, in reality, that never happened.

Actually, the My Big Fat Fabulous Life star said a party took place for “Season 1 and Season 2” only. But this year, with COVID-19 “rampant,” Whitney Way Thore noted, “I guarantee you Babs and Glenn have been asleep since 7:45pm.” In the clip, fans saw her eating popcorn and drinking out of a cup. And someone, at first glance, apparently got it all wrong.

One person arrived in the comments and wrote in a rather commanding way, “Eat skinny girl brand popcorn and drink water.” Well, that upset a lot of people, including the MBFFL star. Whitney replied, “what’s absolutely hilarious is that this does happen to be skinny pop popcorn. Oh to live in a world where a fat girl is eating skinny pop and then she gets reprimanded and told to eat skinny pop.”

Actually, Whitney Way Thore ate skinny pop, and others picked up on that, commenting about better flavors. Of course, fans tore into the Debbie Downer’s comment. And many of them checked the profile and complained that people who call themselves “Christians” should be nicer. However, that didn’t chase off the person who stood their ground.

Not a troll, claims the critic

Perhaps this one time, people who hate trolls might ease up and give that person the benefit of the doubt though. They defended themselves, saying they only wrote an answer to a question that Whitney asked. And yes, Whitney did ask “What do you do on premiere night?” So, they felt that their comment came in reply to that question. Actually, anyone might take it that way, or as a commanding instruction.

One person kindly suggested the person edit her comment from “Eat” to “eating” to prevent this sort of Debbie Downer accusation. Notably, these days Whitney Way Thore slaps right back at trolls straight away. And fans follow suit. Sick and tired of trolls, everyone fights back. However, sometimes, that leads to a little bit of sensitivity. It seems clear that more and more, people need to think before they post on Instagram.

‘Below Deck Med’: Lexi Wilson Actually Liked Her Crew Members
Todd Chrisley Reaching Out To His Hurt Child, Which One?
‘Y&R’ Spoilers: GAME OVER! Phyllis Blows Tara And Sally Up?
Courtney Waldrop Rushes Rawlings To Hospital, Leaves In A Cast
Josh Duggar’s Arrest May Not Be The REAL Reason ‘Counting On’ Is Over