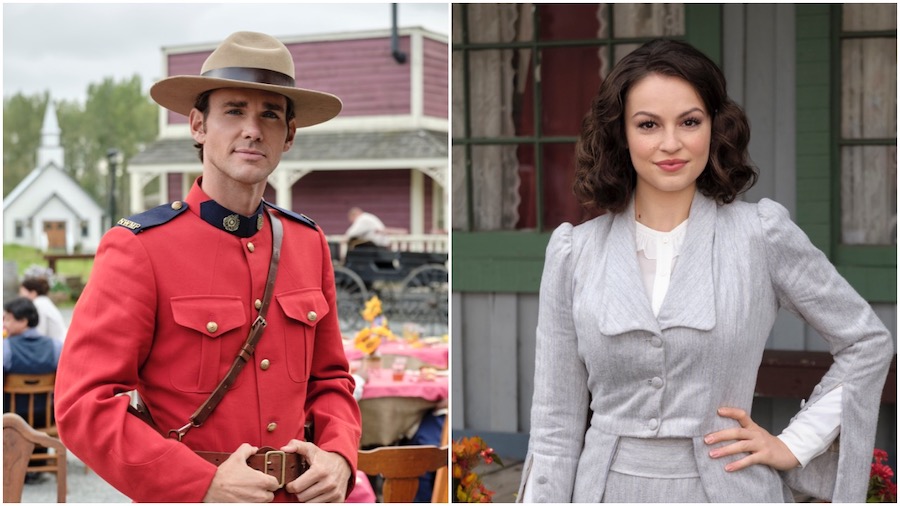 What do we know about this budding romance?

On Wednesday, When Calls The Heart star Kevin McGarry shared a photo to Instagram. The photo was of two white coffee cups, filled with frothy brown liquid, on a granite tabletop. On the bottom half of the photo are three Polaroids of Kevin, alongside Kayla, with both in modern day clothes. Kevin tagged Kayla. His caption? “Photo evidence. 📸.”

In the comments, WCTH costar, Paul Greene posted, “Where are our Polaroid’s (sic) Kevin ?” Cheeky Kevin replied, “@paulgreeneofficial under my pillow.”

Below their banter, hearties asked questions and made their own comments. They quickly figured out that the two Hope Valley residents are a real life couple. Another costar, Andrea Brooks wrote “Yes.” In addition, Jingle Bell Bride star Julie Gonzalo wrote, “Ahhh.. That’s where they went.. cool, cool.”
Instagram is certainly the place to let everyone know.

The inquiring minds at ET was able to ask around and got a confirmation. A source close to the couple shared that they only started to date “recently.” Most of all, the couple is quite happy. They even report that Kayla had shared a white heart below a screen shot of Kevin’s Instagram post. That is very sweet!

Kevin McGarry joined When Calls The Heart at the beginning of Season 6, as did Kayla Wallace. Although their characters have not had a romantic story, they are certainly quite adorable together.

Now that When Calls The Heart Season 8 has completed filming, Kevin and Kayla certainly have time to spend together. They began production back in July, and completed filming just a week ago.

They begun filming the show just as some of the Covid-19 restrictions were lifted. When cast and crew arrived to the location near Vancouver, Canada, they set up “pods.” This means that only people doing the same job could hang out together.

In addition, everyone wore masks, and everyone practiced social distancing. Only those who were in front of the camera were allowed to take off their mask. Moreover, they filmed outside as much as possible. This means no hugs or high fives.

Another big staple on set are the tables of food. Instead of opening up a buffet, where everyone can pick what they want, catering prepared and packaged individual meals. Unfortunately, this also meant no big bowls of candy. Less hands in a jar, means more safety.

Unfortunately there will not be a 2020 When Calls The Heart Christmas movie. But, fans will get 12 episodes in Season 8! Meanwhile, hearties can discuss the new romance with Kevin and Kayla!