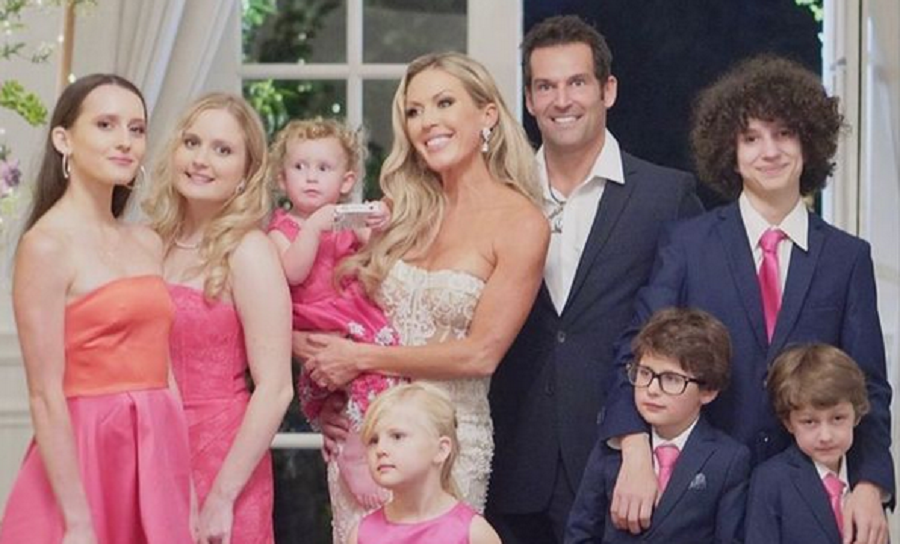 Braunwyn Windham-Burke and Sean Burke had their 20-year vow renewal ceremony on Wednesday night’s episode of The Real Housewives of Orange County. This season has been a big one for the Housewife. In the first episode, Braunwyn admitted that she’s a recovering alcoholic. So, she really wanted to celebrate the major milestone with her husband.

Braunwyn admitted that she wasn’t sober during their wedding. She doesn’t recall what happened. Before the latest episode, the reality star shared various behind-the-scenes photos on Instagram. The lavish moment took place at the Parker Palm Springs hotel in Palm Springs, California.

Earlier this year, Braunwyn Windham-Burke and Sean Burke celebrated their 20-year wedding anniversary with a vow renewal ceremony. On Wednesday, November 18, the Bravo star took to Instagram to post several photos from their special day.

“Join us tonight at 9pm. @bravotv as we say ‘still going!’ In a hilarious ceremony that pretty much sums up our life!” Braunwyn captioned one of the family photos.

Braunwyn revealed the event took place before “we all went home and quarantined separately.” She was grateful to share this moment with her friends and family. Drag queen Babette Schwartz officiated the wedding. In addition, Braunwyn wore a strapless, floor-length, mermaid wedding gown and had her blonde hair styled in loose waves.

In addition, the couple’s seven children – Hazel, 2, Koa, 4, twins Caden and Curran, 7, Jacob, 15, Rowan, 18, and Bella, 20 – were all in attendance. They wore color-coordinated for the romantic vow renewal. The girls wore pink dresses while the boys matched Sean in their blue suits and pink ties.

In a series of Instagram Story posts, Braunwyn credited the people and businesses who helped make their big day happen. She even credited Schwartz and Big AZ Letters, which she thanked for “saving the day!!!” Their wedding was initially an outdoor event, which was changed at the last minute.

Braunwyn posted another loving photo of herself and Sean kissing with their children by their side. She wrote, “Chaos of the best kind.” This comes after Braunwyn announced that Sean moved back into their family home. In a previous Instagram post, she proudly posed next to her husband, adding that she felt “hopeful this afternoon.”

Are Braunwyn and Sean back together?

Rumors have been swirling for months about Braunwyn Windham-Burke and Sean Burke. Her Instagram update came after she admitted that she and Sean were living separately while “redefining” their marriage. Braunwyn has talked a lot about their “modern marriage,” especially on social media. The couple is currently navigating their marriage and figuring out how to make it work.

“We’re finding a new normal. We’re renegotiating the terms of the contract when it comes to our marriage, for sure,” Braunwyn told Entertainment Tonight back in October. “We are [and] we will be married forever. We have 100 percent faith we are going to raise our kids and grandkids together.”

She revealed that they’re no longer “following the old, antiquated rules anymore.” The couple is living on their own terms. Braunwyn explained that they don’t “have to fall into the social norms” as other couples do. She also revealed to Access Hollywood that she’s exploring her sexuality while living apart from her husband.