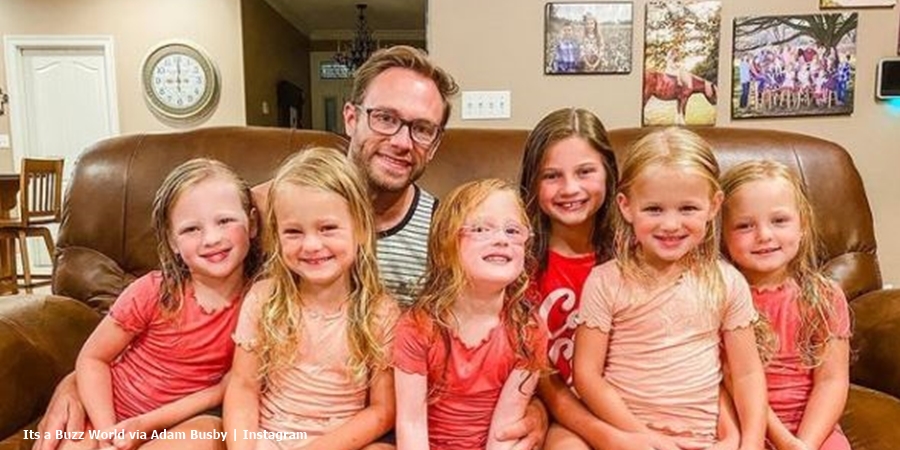 OutDaughtered quints Hazel, Ava, Riley, Lulu and Parker make their own beds in the morning. Fans agree that quints grow up so fast. And, they admire Adam and Danielle Busby as parenting goals. Now they turned five-years-old, it looks like the TLC couple train their kids very well when it comes to daily chores.

Making beds for five little girls on a school morning seems like a monumental task for Adam and Danielle Busby. Some days, things get a bit hectic for Danielle. But, it looks like the little kids and big sister Blayke got a handle on helping out by keeping their bedrooms tidy. Taking to his Instagram Stories on Tuesday, November 17, Adam shared a few clips of his daughters.

Adam walked into the bedroom where the OutDaughtered quints sat playing with some soft toys. They arranged them neatly on a small round table. Naughty Hazel told him to “get out.” Danielle, with her husband, asked her who she thought she’s “talking to.” But, she just laughed. And then, Adam told them it’s time to go “downstairs as it’s a school day.” However, he sounded pleased as the kids made all the beds.

Adam asked the kids who made the beds. And Riley claimed that she and her sister Parker made them up. Then, she told her dad that Lulu also made beds. So, Lulu ran off to the twins’ room and showed her dad. She made both of them. So, Adam called her a “rockstar.” While the girls seem very good about this morning chore, is it about the right time for this responsibility?

The OutDaughtered quints probably learn about this chore at the right age, according to School Hours. They note that a great way to educate them and get kids used to bed-making should start at around the age to three to four. They recommend that the little kids help with simple tasks like straightening the pillows. Then, build up from there until they make their own beds every day.

Bed-making an introduction to other routine chores

The outlet notes that by the time the kids become used to the routines of bed-making, they adapt to other chores. They start assisting in the kitchen and tidying up play areas. Or, they might help out with the living room. Then, one major plus-side to bed-making includes bringing the kids “a sense of pride.” Plus, it “reinforces the fact that…little things in life that matter.”

Certainly, Riley, Parker, and Lulu sounded very pleased with themselves. And, the “pride” really came through.

Do your kids, like the OutDaughtered quints, make their own beds? What do you think is the right age for learning about routine daily chores? Sound off your thoughts in the comments below.