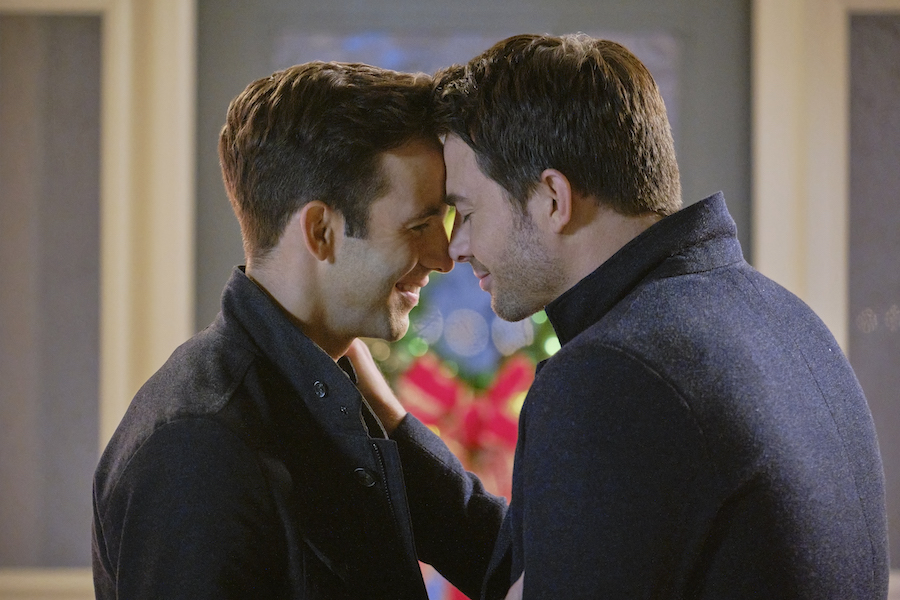 Hallmark is about to make network history on Sunday night. They will be airing their first LGBTQ movie. The Christmas House will air on the Hallmark Channel on Sunday night. It stars Jonathan Bennett and Brad Harder, as a same-gender married couple, who are awaiting news on the adoption of their first child.

Jonathan Bennett has been all over the media discussing the importance of this movie. What do we know about this new movie and when can you watch it?

Jonathan Bennett was on ET on Tuesday night, discussing The Christmas House. Cohosting the show, he shared how happy he was to be part of this historic Hallmark LGBTQ movie. He is part of the first gay couple on screen, in a Hallmark movie.

He said, “This movie is so important. It feels like I’m part of progress, and it feels good.” And he further discussed representation. “It’s an honor.”

Bennett, who came out in 2017, has always played straight roles. This includes playing the Hallmark hunk. So, when he got the call to do this movie, he asked who his leading lady was. Jonathan was quite surprised and happy to learn that he would be starring in this landmark role. “Representation is so important, and to represent this storyline on Hallmark Channel, it’s an honor to make a little history.”

In addition to Bennett and Harder, Sharon Lawrence (Dynasty), Treat Williams (Chesapeake Shores), Robert Buckley (One Tree Hill) and Ana Ayora (In The Dark) star in Hallmark’s The Christmas House.

This is the story of the Mitchell family. Phylis (Lawrence) and Bill (Williams) call their their two sons to come home for Christmas. The family is going to create a Christmas house. That means every single surface of the house will be covered in Christmas. Meanwhile, each family member is going through a different life transition.

Robert Buckley wrote the script. His own family had the Christmas house tradition with the over-the-top decorations. It looks like a lot of fun, in between some real-life drama.

Jonathan Bennett Thanks Hallmark, Michelle Vicary For Making This Happen

Johnathan Bennett went to Twitter to thank Michelle Vicary for this movie. Vicary is executive Vice President of programming at Hallmark. Bennett wrote, “A huge thank you @MichelleVicary and the whole Hallmark family for making this movie happen.”

Just a year ago, there were calls to boycott Hallmark because they removed a Zola wedding advertisement that included two women kissing. After reversing that decision, Hallmark promised to become more diverse and inclusive. Already, the 2020 movies have been more inclusive. But, The Christmas House is a big step forward.

Jonathan Bennett Was On DWTS Season 19

For those who are not familiar with the effervescent Mean Girls actor, they may actually remember him from Dancing With The Stars Season 19. Jonathan admits he didn’t make the finals–or the semifinals. In fact, he says that he is not terribly good at dancing.

But, Jonathan did post on Instagram a video of him, along with Brad Harder and Sharon Lawrence doing a cute little dance to “Jingle Bell Rock.” They certainly deserve a perfect 10 score!

His social media is filled with a lot of fun and laughs, with Jonathan Bennett’s big personality front and center.  Many Hallmark fans expect the movie to reflect this same joyful energy.

If the cast can bring even half this much fun and energy to the story…Very excited for THE CHRISTMAS HOUSE, set to air Nov. 22 on Hallmark.

When Can You Watch Hallmark’s First LGBTQ Christmas Movie, The Christmas House?

Will you be watching Hallmark’s historic LGBTQ Christmas movie?

Brandi Glanville Admitted To Hospital With Mystery Illness
Oh No! What Has Hazel Busby So Upset In This Heartbreaking Photo?!
Savannah Chrisley ROASTED For Being Spoiled & Privileged
‘The Witcher’ Season 2: Premiere Date, Plenty Of ‘Man Flesh,’ But No Bath Tub
‘LPBW’: Check Out Isabel Roloff‘s Very First Baby Bump Picture!