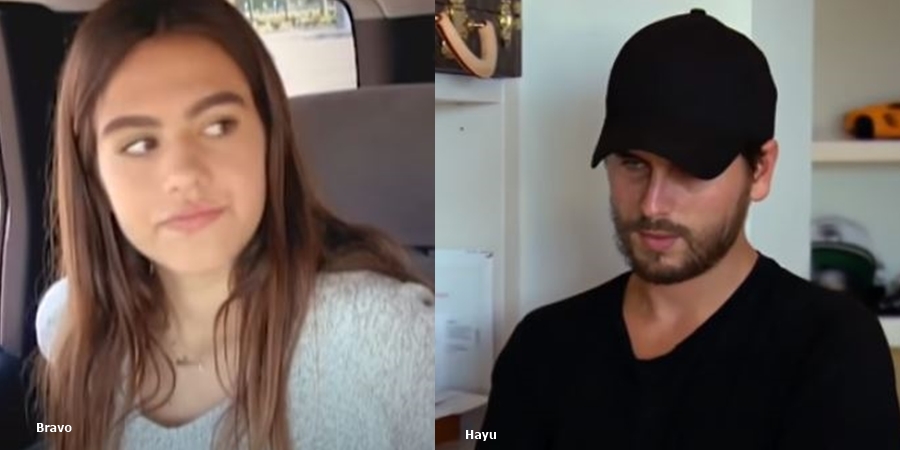 Amelia Gray Hamlin, the daughter of Lisa Rinna from RHOBH, and Scott Disick partied together in LA at Halloween. Thought to be just friends, as in August she dated Mercer, perhaps it’s more than that now. Another photo emerged of her with Kourtney Kardashian’s ex, this time at the beach.

We reported on September 1, that Amelia seemed very much in love with a guy named Mercer. Notably, he’s connected with Real Housewives of Beverly Hills. In fact, this time last year at the BravoCon, Kim Richards mentioned that her Brooke is Mercer’s sister-in-law. Plus, in Season 10, Kim and Lisa Rinna talked about it. In September, Amelia Gray seemed head-over-heels in love with Mercer, who she met when out with friends.

While she shared some photos of Mercer on her Instagram, they seem few and far between. In fact, it’s not clear if Amelia Gray Hamlin even dates him anymore. Recently she got spotted out and about with Scott Disick more than once. Life & Style noted that when they partied at Halloween, she made for the third date he ventured out on with another woman since he broke up with Sofia Richie.

The outlet noted that Amelia and Scott arrived at the LA party together. But hey, that might not mean they date seriously. Especially, as Scott apparently plays the field. And, he focuses on co-parenting with Kourtney Kardashian. But now, another photo emerged of Scott and Lisa’s daughter together. This time they walked on a beach and looked rather cozy.

The Bravo Housewives account shared the photo on their Instagram. Amelia looked slim and slinky in her bikini, while Scott wore a black tee and black shorts. He draped his arm around her neck. The account captioned it with, “Lisa Rinna’s daughter, Amelia Gray Hamlin…recently spotted arm-in-arm with Scott Disick! #RHOBH .” Of course, many Real Housewives of Beverly Hills fans reacted.

One follower said, “This makes me uncomfortable 😐.” Plus, a lot of fans raised the age difference of 37 and 19 years years old.  Then someone commented, “Needs constant attention just like mama…..🙄,” taking a stab at Lisa Rinna. Meanwhile, others suspect this makes for a perfect storyline for Lisa on another season of RHOBH. This comment also came in: “WHATTTTT…He likes them young I guess.”

While people dissed Scott for chasing a “baby,” others suggested he “run” for the hills. One fan noted, “Seriously? 19 though? This is not cute for either side.” Actually, seeing Amelia Gray Hamlin with Scott Disick came over as rather “creepy” for some followers. And another one felt, “this is both sad and comical.”

What do you think about Amelia and Scott spotted out together twice inside of a month? Sound off in the comments below.

Busby Fun This Weekend After Danielle Returned From Her Vacation
How Did Josh Duggar Keep His Dirty Secret From Wife?
Lindsie Chrisley Wishes She Was Making Out With What?
‘Seeking Sister Wife’ Season 3 Episode 7 Recap: May 3
‘Vanderpump Rules’ Alum Kristen Doute Reveals Her Favorite Animal