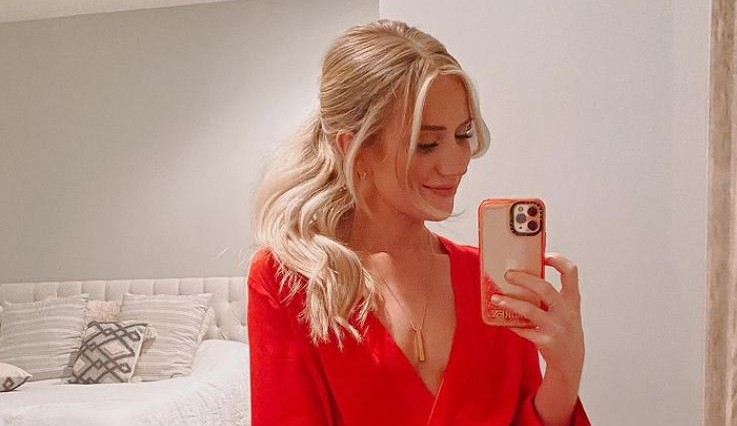 2020 remains packed full of rumors in Bachelor Nation. There have been rumors about engagements, marriages, splits and of course pregnancies. Most fans who follow Lauren Burnham and Arie Luyendyk Jr. know that they are actively trying for baby number 2. She suffered a miscarriage they announced in May and have been trying again since the doctor gave them the okay. Now, a recent Instagram post has some fans buzzing. What did Lauren have to say about it?

The photo she shared was of her with three of her friends. All three of the other women were pregnant. This of course started the rumor buzz that perhaps Lauren is also pregnant. Lauren was quick to debunk the comment.

She shared the picture with the response saying she’s either pregnant or launching a maternity line. Lauren commented saying it just so happens all her friends are pregnant at the moment. She said it was an early birthday celebration.

However, even if it were true, it would be fairly early in her pregnancy and she probably wouldn’t be sharing the news with the world just yet.

She thought she was expecting

Around the end of September, Lauren did share that she really thought she was pregnant with baby number 2. She admits to being extremely emotional since losing their pregnancy. Lauren shared more of how she was feeling with US Weekly. She said she’s taken tons of pregnancy tests. And, Lauren said, “Each one has been a big fat no. I was actually convinced I was pregnant this month only to find out yesterday that I wasn’t.”

She said she got pregnant so easily and unexpectedly with Alessi that she never imagined she and Arie would be having problems with baby number 2.

Lauren knows it will happen when it’s supposed to happen. However, she finds herself getting discouraged while she waits.

In the meantime, she is loving being a mother to daughter Alessi. In an Instagram story today she shared an adorable video of herself and Alessi watching Frozen. She said Alessi was to into the movie to care about her but she didn’t care. Her love for her daughter to evident. She and Arie are great parents.

Fans can’t wait to watch Lauren and Arie navigate through a new pregnancy journey. Hopefully they won’t have to wait too long. Perhaps an announcement is just around the corner.

Nathan Bates & Esther Keyes Have An Exciting Announcement For Fans
Blake Moynes Mom Emily Moynes Speaks On Her Sex Positive Family
Wait, What? Does Isabel Roloff Plan To Raise Her Baby In A Van?
Is Isabel Roloff Worried How Pregnancy Will Impact Her Eating Disorder?
Javi Marroquin Calls Cops On Lauren Comeau For Abuse, Guess Who Has His Back On This?