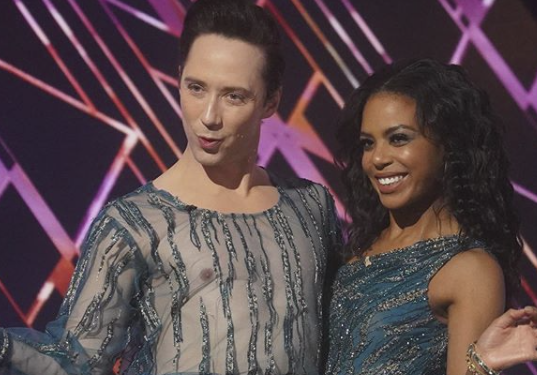 Olympic figure skater Johnny Weir and his partner Britt Stewart will not compete in the DWTS finale. Unfortunately, the pair received the least number of fan votes. Johnny and Britt had amazing routines throughout the season but found themselves in the bottom on multiple occasions. It’s really not hard to see that fan votes count for quite a bit.

Johnny Weir Believes Dancing With The Stars Is A Popularity Contest

“It hurts a lot because it definitely feels like a popularity contest more so than a dance contest but that’s part of it,” Johnny said to Us Weekly after Monday’s episode. “I knew what I was signing up for. I can say wholeheartedly that I would always prefer to be myself than be popular.”

Online, many fans agreed that Johnny and Britt didn’t deserve elimination. They repeatedly received high praises from judges. They even earned perfect scores for multiple routines. But as we all saw, it’s not always the most talented dancer who wins. Even the judges agreed that viewers are often “the fourth judge.”

The Judges Praised The Couple

Before their elimination, Johnny Weir and Britt Stewart were in the bottom two twice in previous episodes. Both times, the judges saved them. Unfortunately, they couldn’t do it this time. But even so, it’s clear the judges felt strongly about the pair.

“I think Johnny and Britt absolutely could have been in the final, Skai and Alan could have been in the final. So, tonight was always going to be difficult no matter what, no matter which way you looked at it. Two people going home tonight, no matter which way you look at it, it was always going to be a tough one,” said judge Derek Hough. “Hopefully, Johnny will find solace in knowing that he left on a really high note. He left with grace and a really great performance.”

“Technically, he’s very, very good and he made some very strong individual choices — he stuck to his belief and it worked. It was beautiful, ” Bruno told Us Weekly. “He really improved. And what he did, he remained himself and he performed the way he believed he should have and that is a very, very important stand. And if only two or three people believe in that and are touched by it, it’s a great achievement regardless if you got kicked out.”

The Competition Ends Next Week

Coming into the competition, Johnny Weir never believed he had a special advantage. Even so, many fans expected him to go far in the competition. Olympians tend to do very well on Dancing With The Stars and several went on to win the Mirrorball Trophy. Although Johnny’s time is up, most fans agree he did remarkably well during his run on the show.

Dancing With The Stars Season 29 ends next week with four remaining couples. Who do you think will win it all? Let us know in the comments.