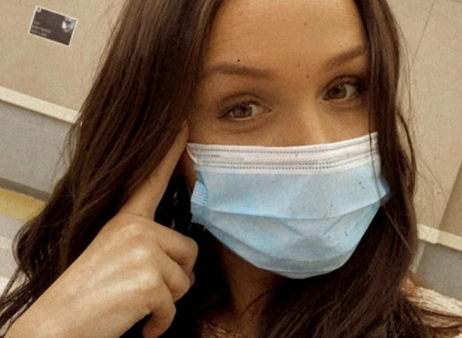 After months of waiting, Grey’s Anatomy finally returned last Thursday. There was all sorts of drama and a special guest appearance from a long-departed character. But some viewers are annoyed with the show. Star Camilla Luddington (Dr. Jo Wilson) recently clapped back at a few critics online.

This article will contain spoilers from the Grey’s Anatomy season premiere and will discuss plot points from previous seasons as well.

Us Weekly reported one viewer thought the show wasted PPE. In the middle of a global pandemic, they thought the supplies could be used by first responders instead.

Camilla responded, “If you see any of us wearing KN95s behind the scenes it’s because we are wearing our costume masks. We don’t also get an extra KN95 to wear between takes.”

If you see any of us wearing KN95s behind the scenes it’s because we are wearing our costume masks. We don’t also get an extra KN95 to wear between takes. https://t.co/f4eJjimdtX

If you caught the new episodes, you saw the Grey-Sloan surgeons thrown into the middle of the pandemic. The characters are exhausted, burnt out, and emotionally drained. Their patients drop dead left and right due to complications from Coronavirus. Season trailers teased that this season would be a warzone. They definitely didn’t lie.

“It’s social distancing, it’s masks, it’s visors — it’s masks on the actors between takes and during rehearsals,” Krista Vernoff said in a recent interview. “It’s just shocking how slowly we’re having to move. … It changes the feeling of the show. … It is what it is.”

What’s In Store For Jo Wilson This Season?

Grey’s laid the framework for Camilla Luddington’s character to find love again. Jo’s husband, Alex Karev, left her last season under mysterious circumstances. Evidently, he got in touch with his ex, Izzie Stevens. And she was secretly raising his children without anyone’s knowledge this entire time. Alex took off, leaving Jo absolutely heartbroken. Now, she’s just trying to move on.

Without giving away too much, we did see Jo show some interest in another male character. It’s definitely not a relationship most people thought would happen, but it seems like it could work out.

E sat down with Camilla to discuss her romantic future. They asked if Jo was okay. She replied, “I think my answer is no,” Camila laughed. She then changed her answer a little bit. “I actually do think she’s okay. I think that Jo is making her way out of this heartbreak, and it’s a slow process and I think that she’s trying to figure out what she needs.”

Are you excited to see how the rest of the season plays out? Let us know in the comments.