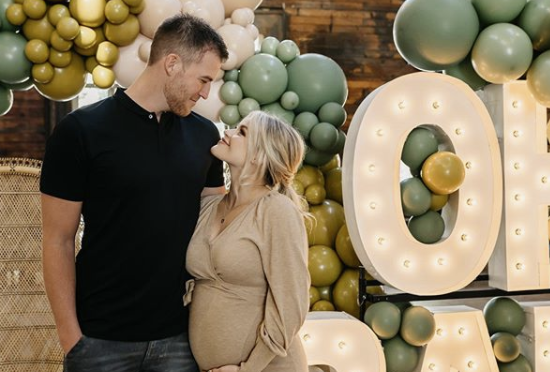 Dancing With The Stars pro Witney Carson has a few months left in her pregnancy, but she’s already focused on her birth plan. The first time mom is adamantly trying to avoid a C-section. She recently updated fans on her Instagram story to discuss the plan.

Witney shared that she’s currently at 32 weeks. She and her doctors plan to induce her at 39 weeks. This also means that she and her husband picked her son’s birthday, which she described as exciting, yet terrifying.

“My birth plan is to get induced, but obviously things change so I’m just kind of gonna go with the flow,” the dancer said. “But as of right now, that’s where we’re at so I’m just gonna try and get through this home stretch.”

She says her husband, Carson McAllister, was born 3 weeks early at 9 lbs. After learning this, Witney quickly decided to avoid a C-section.

“I asked my doctor about that and he said the best way is to be induced. He said there’s been a lot of studies about how they’ve had less C-sections with women who were induced versus women who waited until full-term — so that’s kind of what I’m basing my decision off of,” Witney informed viewers.

Her best friend and fellow Dancing With The Stars castmate, Lindsay Arnold, recently gave birth via C-section. Lindsay seemed to do okay with it, but it’s definitely not for everyone.

“Obviously, it’s really early still, and I’m gonna try and monitor how big he’s getting,” Witney concluded. “Hopefully, we get an ultrasound at 36 weeks and get a better idea of how big he’s actually gonna be.”

Preparing To Welcome The New Bundle Of Joy

Witney recently held a baby shower to welcome her new son. She told PEOPLE that she almost canceled it, but managed to pull it off safely and celebrate with friends and family. She added that her support system kept her strong this year. Experiencing pregnancy in the middle of a global pandemic certainly can’t be easy. 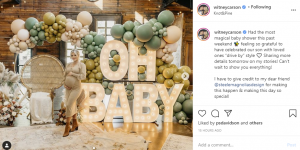 “Through all the emotional ups and downs, they have stood by my side to help me through it. So much good advice and love for me and baby,” said Witney. “Carson, my husband, has been especially amazing! I couldn’t do this without him. He really is my rock and I couldn’t be more grateful for his compassion and patience.”

Until the baby comes, Witney is going to spend her time at home relaxing. She’s been tuning in to Dancing With The Stars on Monday nights to cheer on her friends and castmates. She said in previous interviews that it’s been a different experience as a spectator, but she’s enjoying it so far.

The Dancing With The Stars season finale is on Monday night at 8 PM eastern time. Tune in and see who takes home the Mirrorball Trophy this year.