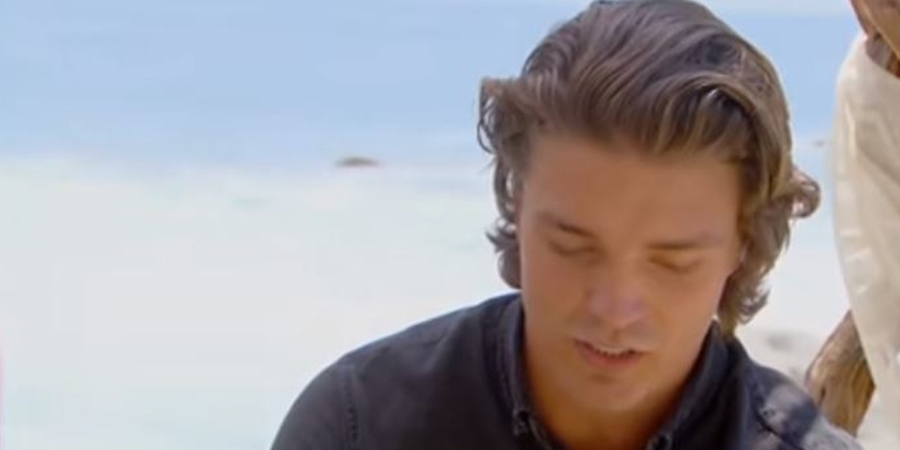 BiP fans know that Dean Unglert loves living out of his van and adventuring around the wilderness. But this week, he and Caelynn Miller-Keyes put it to a different and convenient use. They went to a drive-in theater and watched TENET. But, in his rather humorous way, he gave the movie a thumbs down.

Dean sprinkles his posts on Instagram with humor. In fact, you might recall the hilarious comment he made about Nick Viall in September. We reported that Nick bought a new home, and shared a photo of himself in the garden. He wore a bathrobe, and fans noticed his underwear. So, Dean commented, “what we all want to know, is does the carpet match the drapes?”

So now, when he shared about TENET, the BiP star brought out more of that sardonic humor. Bachelor in Paradise fans saw that he shared a photo taken through the van while they watched TENET from inside it. His caption read, “and the oscar for most confusing movie of the year goes to… tenet!” Then he added, “inaudible cheers,” and  “raucous applause.” And, in the comments section, he talked about how he and Caelynn actually “fell asleep” during the movie.

One BiP fan commented on Dean’s post. They said, “not just us lol.” And, another person noted, “caption tho. We are not alone 🙏.” Then along came this comment: “it sounds like we weren’t the only ones. hella confused! Lol.” So clearly, other ABC fans also found the movie very confusing. But one Bachelor in Paradise fan suggested, “if you watch it while high it actually makes so much sense.” Which might not be great idea in a drive-in theater!

Meanwhile, in the comments section of the trailer for TENET on YouTube, other people also felt weirded out by it. One person wrote, “Other movies: Get spoilers by watching trailer. Nolan’s movie: Didn’t get spoiler even after watching movie.” And another confused person noted, “I just came back from the cinema after watching it for the second time. I don’t fully understand the movie yet, but that doesn’t matter as I already know I’ll be going back.” Maybe the BiP couple also gives it another chance one day.

TENET is it so bad?

For those people who inexplicably claim they get the movie, it seems wonderful and as clear as day. While comments like this came in, “This movie was way more complicated than it had to be, went in to be entertained came out with a PHD in physics,” others seemed less confused. A fan noted, “Just saw it. It was something else.
Nolan deserves credit for coming up with something entirely original.”

Did you see TENET yet? Like Dean Unglert from BiP, did it confuse you completely? Or, are you one of the lucky ones who gets it? If you get it, please tell our readers in the comments below what it all means.