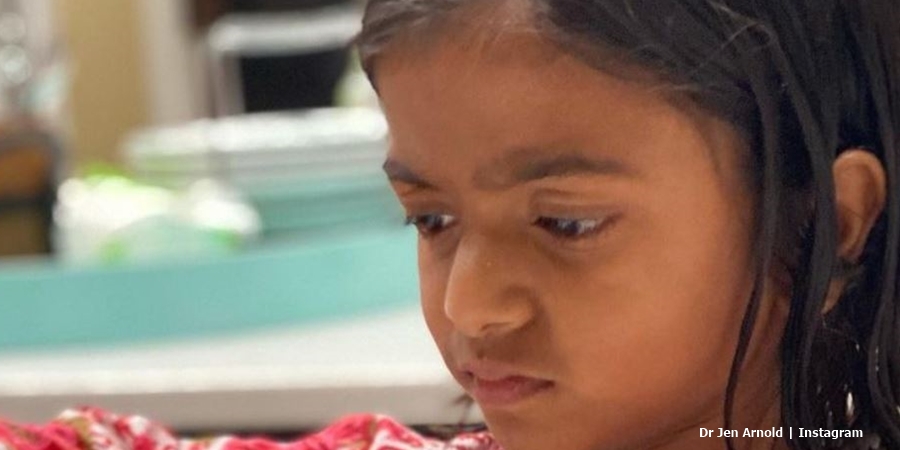 The Little Couple fans love the way Jen Arnold and her husband Bill Klein help their kids get to know their cultures. Will originally came from China and Zoey from India. Zoey learned Indan dancing, and often, the family celebrates Indian holidays and festivals. But during their feast for Diwali, fans wondered what’s up with Zoey.

On Sunday, Jen Arnold shared a whole bunch of photos of them celebrating Diwali. Recall, it’s an Indian festival. And the Klein’s adopted her from there. They all sat down to a huge meal and it looked delicious. If you don’t know, the five-day Festival of Lights is celebrated by millions of Hindus, Sikhs and Jains across the world. The BBC explains that this year, Diwali started on November 12, and “lasts for five days.” The main day came on Novmeber 14.

Apart from other festivities, families often participate in delicious feasts. So, The Little Couple stars prepared a yummy-looking meal. In the first photo, Zoey stood next to her mom. In the second one, she started dishing up some food on a plate. Next, a photo revealed her sitting next to her dad in front of a range of serving dishes. Then, came a picture of Will by himself. And, one of Zoey sitting in front of a plate full of food. And in the final one, she and Will sat together.  But, fans worried about Zoey’s facial expressions.

In the comments, plenty of fans praised Jen Arnold and Bill for teaching the kids their traditions. Plus, they liked that the festival becomes more real for Zoey. However, many fans talked about Zoey who looked very unhappy in all the photos. One person noted that one smile looked forced, like a “professional.” But, more TLC followers thought something seemed off.

Actually, most of the photos revealed a grimace rather than a smile. And, while a fan thought maybe she just grew tired of photographs, others wondered if she’s in pain. One of those The Little Couple fans commented, “Awww sweet little Zoe what’s going on? Your facial expression … 🤗” And then, others also started commenting on it.

One comment read, “But it looks like somethings going on there. Maybe, she just didn’t want to have her picture taken. If you look@closely Will looks a little off too…” Then, this comment arrived, “if you zoom in on the one where she is sitting at the table with Will she is clearly mad at something!” In another thread, someone thought that Zoey might suffer some pain.

Others noted that clearly, Zoey looked unhappy. And, one The Little Couple follower asked, “Is she ok? she looks sad and mad for some reason.”

Hopefully, whatever the problem is, Zoey gets over it soon, and her sweet face lights up in a sunny smile.