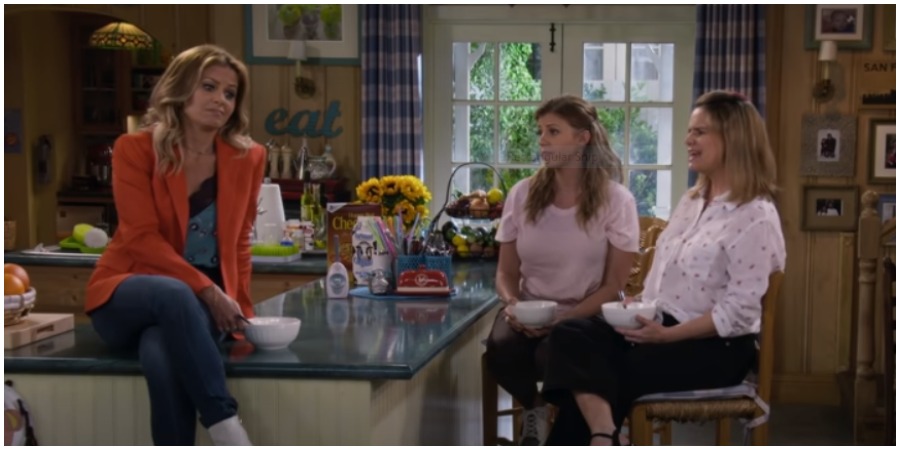 Jodie Sweetin is missing her Fuller House co-stars this week. The actress took to her Instagram account to reminisce over the final taping of the Netflix series, which took place one year ago.

Fans still aren’t over the Full House spin-off’s cancelation, and Jodie’s post was a reminder of what they’d lost. In the photos, Jodie, who played Stephanie Tanner on the show, shared some behind-the-scenes snaps. The pics showed the cast and crew hugging, crying, and smiling brightly as they filmed the very last episode.

Jodie shared the photos with a sweet and lengthy caption. Her words summed up how she’s been feeling in the months since the show ended.

“I know I’m technically a day late, but I miss my #fullerhouse family SO much!! It’s been a YEAR since we wrapped the show. It was last November when we finished and what a strange, weird year it’s been since then. I miss each of these faces terribly. Not only the cast, but the crew as well. Our amazing AD’s, our fabulous hair and makeup dept, our camera crew, our amazing dialogue coach Gwenn who definitely kept us focused. Or TRIED to, haha,” she wrote of her Fuller House family.

“There’s just so many faces and memories, with so many people that I’ve known since I first started in this business when I was about 4 years old. They are definitely family and I know we will ALWAYS be in each other’s lives. And I’ll be honest… seeing all those people together in a way that can’t happen now because of Covid- it hits different,” Jodie added.

She finished off her love-fest by revealing that she’ll never forget all of the great times. She also touched on all of the joy they’ve brought to her life.

We're playing a round of the Nearlywed Game soon and need your help!

Drop some Fuller House trivia questions 👇 for a chance to have the cast answer yours. pic.twitter.com/t0YUFm6XU6

“I’m grateful for the love, the joy, the hugs (of course) and a lifetime of memories with some of the best people I know, in this business or otherwise. Miss them all SO MUCH.”

Jodie’s social media share comes just days after her on-screen sister, Candace Cameron Bure (DJ Tanner), hinted that she and the rest of the cast would love to bring the show back for a Season 6.

Candace spoke to Us Weekly earlier this month, and revealed that she wanted to continue to tell the story of the Tanner, Fuller, and Gibler families with more episodes.

“We would absolutely love it if we could because I think there are so many fun stories to tell with the Fuller House gang … People are still watching the show that isn’t caught up on Netflix. I still receive daily messages five months later that are like, ‘What’s happening with season 6? There’s just so much more there,” Candace admitted.

Jodie Sweetin’s post and Candace Cameron Bure’s comments now have fans keeping their fingers crossed that Fuller House may eventually return to television in the future.

Courtney Waldrop Rushes Rawlings To Hospital, Leaves In A Cast
OMG!! Did Meri Brown Admit Her Husband Kody ABUSED Her?!
Wait, Why Was Jeremy Vuolo Silenced On TikTok?
‘Return To Amish’ Rosanna Miller Officially Confirms Pregnancy- See Her Bump
Chrishell Stause Vacations In Paradise With Her New Man — Who Is It?