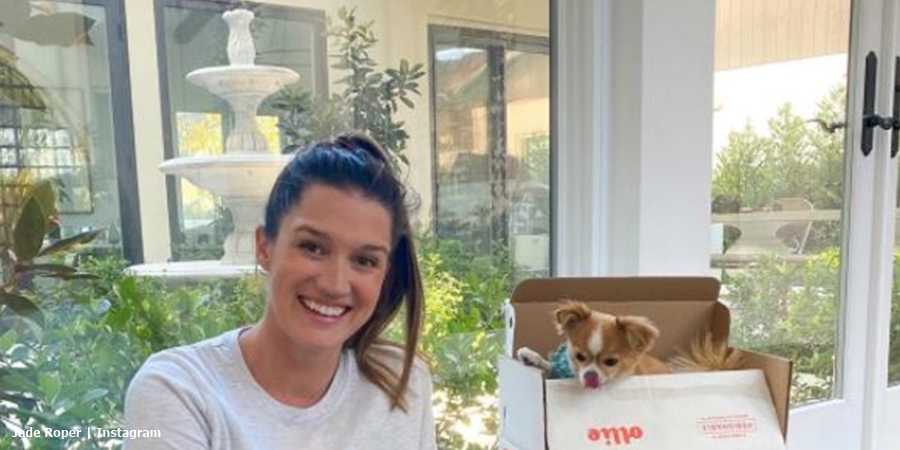 Jade Roper Tolbert safely delivered her third child in a water birth at home. Bachelor Nation fans agreed that she looked very serene and in love with Tolbert and her baby afterward. Fans couldn’t really see much more than a mop of dark hair on the little one in the first photo. But, now more pics emerge and she promises the baby name reveal soon.

We reported that Jade and Tanner involved their fans in baby name choices for their third child. In fact, they also did that with their second-born child, Brooks. First names narrowed were down to Jack or Reed. Plus, she invited middle name suggestions. So naturally, when she shared another photo of her son, fans once again asked her about the name they settled on.

Taking to her Instagram late on Sunday night, Jade Roper shared a photo of her daughter Emmy sitting with her brand new baby brother. Propped up on the pillows of the bed, she cradled her brother. In one corner of the picture, Tanner’s arm revealed they kept a close watch on the two kids. Fans got a really good look at the baby and he looks remarkably like his dad, Tanner. And, they asked about the baby’s name.

Bachelor Nation fans adore the photo of the newborn baby

Jade’s caption read, “Emmy can’t get enough baby snuggles. We all love him so very much, even Brooksy laughs and smiles at him! I love how when a new baby enters the family, it feels like they’ve always been here and life before them doesn’t even seem imaginable anymore. He’s absolutely meant to be ours. ❤️”

In the comments, one fan asked, “What’s his name?” And Jade replied. She said, “announcing tomorrow! 😘.” Fans know that Jade Roper and Tanner Tolbert like getting to know their babies a bit before finally assigning a name. So, that might explain the delay for a little bit. However, literally hundreds of people asked about the name. But for now, they must remain patient.

Other fans talked more about the little boy in the comments. And, quite a lot of them agree he looks just like Tanner. Maybe his dark hair highlights the likeness to his dad. One fan commented, “Mini tanner😍😍😍.” And another one said, “You gave birth to Tanner lol.” Well, Jade laughed at that, but other fans agreed completely. One of them noted, “Omg yes! The second I saw this pic I was like WHOA it’s Tanner! 🤣.”

Jade Roper fans know that Emmy and Brooks sport light-colored hair. So this baby really stands out. Perhaps in time, it lightens as well. What To Expect notes that babies with a lot of hair might, “shed” it like “a golden retriever in the first six months.” And, they explain that “color and texture often change — so your baby’s thick, dark hair could make its reappearance a lot sparser and lighter.”