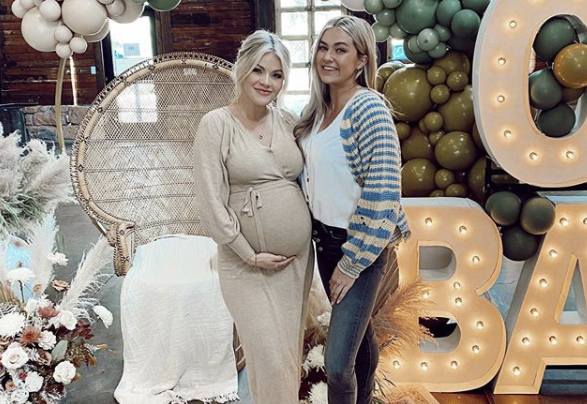 Dancing With The Stars pro Witney Carson sat out this season. If you follow her on Instagram you probably noticed she’s very pregnant these days. Her little one isn’t due until January, but she definitely has a baby bump to show off. She recently threw a baby shower to celebrate with friends and family.

“Loved celebrating this beautiful mama to be ❤️❤️ I am so happy for you @witneycarson cannot wait to meet baby boy!!” Lindsay captioned the photo with the two friends standing side by side. 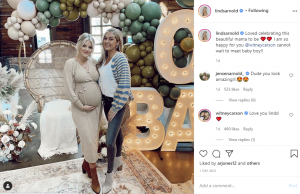 Witney Carson And Lindsay Arnold Experience Pregnancy And Motherhood Together

Lindsay just had a baby herself. She gave birth to a daughter, Sage Jill Cusick, on November 2. We know Witney is having a baby boy, but she’s keeping names to herself for now. Many fans hope that Sage and Witney’s baby will be best friends, and perhaps even dance partners.

“Yes, and it’s perfect we have a boy and a girl,” Lindsay said during an interview with ET. “I feel like it’ll be good because boy and girl friend relationships are so much fun. They can be partners, maybe girlfriend, boyfriend, who knows.”

“It’s actually insane. We’ve done so many things in our lives together, so it’s like, naturally, why wouldn’t we get pregnant together?” Lindsay continued. “It’s so funny because you can’t really plan a pregnancy. I mean, you can plan when you want to try, but it’s not like it’s always going to happen when you want it to.”

Who Will Win DWTS This Year?

Witney and Lindsay aren’t competing this year, but they’re definitely still tuning in each Monday night to see all the action on Dancing With The Stars.

“It’s completely different. It’s so crazy. I’m kind of just enjoying just watching it as an audience member. I don’t have to worry about anything. I feel so proud of all of my friends because they are doing so incredible and a little part of me definitely misses it, but this is such a special journey for both of us,” Witney added.

The two aren’t sure who the winner will be, but they really thought the finals would consist of Nev Schulman and Jenna Johnson, AJ McLean and Cheryl Burke, and Kaitlyn Bristowe and Artem Chigvintsev. But as we all know, AJ and Cheryl went home just before the semifinals. Who knows what could really happen?

Hopefully, both dancers will be able to come back next year. Everyone really misses watching the two compete. But in the meantime, you can catch all their friends on Dancing With The Stars on Monday nights. The semifinals are tomorrow. Will you be watching? Let us know in the comments.