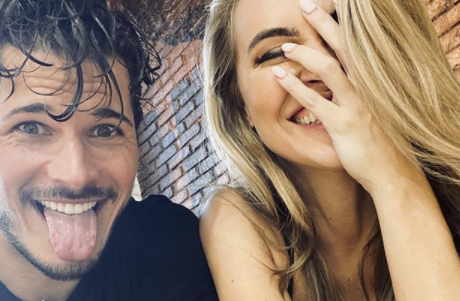 Their time on Dancing With The Stars may be over, but Gleb Savchenko and Chrishell Stause keep in touch. By now, you’ve probably heard some of the crazy rumors surrounding the two. No one really seems to know what the truth is. Did Chrishell break up Gleb’s marriage? Or is Gleb’s ex-wife just seeking attention? The answer really just depends on who you ask.

Us Weekly recently spoke with a source to get all the latest details. The source reports the rest of the cast was well aware of the developing relationship but chose to look the other way. The cast was apparently “really sensitive about the situation, but also felt like it wasn’t their problem or place to get involved,” the source said.

They went on to say that the pair hung out outside of the show and texted all the time. They’re still talking, even now.

“Chrishell and Gleb are still texting all the time and have been in contact about the public frenzy surrounding them,” the insider continued. “Chrishell isn’t bothered by the attention either.”

All The Rumors Don’t Quite Add Up

Now, we don’t know much about this new source, so we have no way of knowing if this is 100% true or not. This source is in direct contradiction with Amanza Smith‘s point of view. You may remember her as one of Chrishell’s Selling Sunset co-stars. She said that she believes Chrishell is wildly angry about the rumors. We all know Chrishell Stause went through a very public divorce with Justin Hartley. Amanza doesn’t think Chrishell would want to be in the spotlight like that again.

Another anonymous source recently came forward and said Gleb’s breakup was because his ex Elena can be incredibly insecure at times. She never got comfortable with all the attention Gleb received on the show.

“Gleb and Elena had been having issues for a few months, and his relationship with [his Dancing With the Stars partner] Chrishell [Stause] was the catalyst to bringing those issues to the forefront and over the edge,” another inside source apparently told Us Weekly. “Gleb is a very passionate person, handsome and always gets attention, and Elena can be insecure.”

In short, we may never know what really happened between Gleb and Chrishell. As time goes on, rumors only grow. Gleb and Chrishell both publicly denied the allegations. Elena spoke to the press to say Gleb cheated on her. However, she never specifically said who he cheated with.

Only one thing is certain — there’s definitely a lot more to this story than anyone really knows about.

But what do you think actually happened? Let us know in the comments.