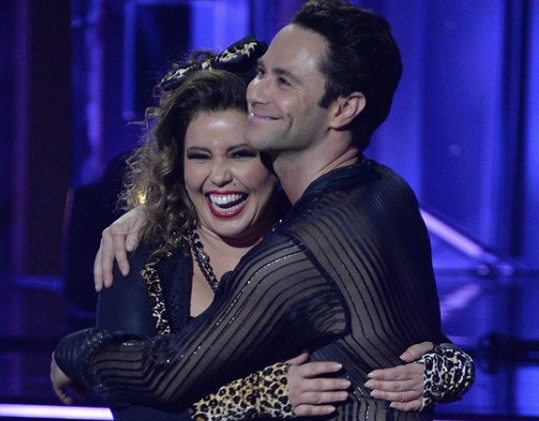 Get ready! Dancing With The Stars Season 29 is in its final weeks. The remaining six couples are vigorously prepping for Monday night’s episode. They know the semifinals will feature a double elimination. Two couples will leave, and the remaining four will compete for the Mirrorball Trophy in the finale. No one wants to go home yet.

The remaining couples are:

ET recently sat down with the remaining DWTS competitors to see how they’re prepping for Monday night.

It's almost time for the #DWTS semi-finals!! Who has your vote?! 👇

Dancing With The Stars Has So Many Talented Competitors This Year

Nelly told the reporters that he was really full of himself when the season began. But now, he realizes he still has a long way to go if he wants to win it all.

“I probably talked crap, but after you get here and see all the good dancers, and everybody that’s so capable of winning this thing, you’re like, ‘OK, what did I get myself into?'” the Grammy winner said. “But it’s been really great. We’re very fortunate. I want to thank my fans because I know that’s the majority of the reason of why we’re still hanging in here. It’s a lot of fun and we’re trying to keep it rolling.”

“We have the Jive for the Redemption Dance and I feel like this could be a really great dance for us. It is just going to give us another opportunity to show Nelly in the ballroom,” his partner, Daniella Karagach chimed in. “This is going to be more true to technique, no lifts, so we’re taking it back to classical ballroom, which I love.”

Even The Top Performers Are A Little Nervous Now

Nev Schulman and Jenna Johnson are one couple that many expect to win. But Nev isn’t so sure. He said he was sure Backstreet Boy AJ McLean was going to be in the finals. And instead, he and his partner Cheryl Burke went home last week.

“As far as competition, at this point obviously everyone’s fantastic. I’ve had a sort of playful, frenemy relationship with Justina all season, because Sasha is such a goofball, he likes to trash talk. We have this fun sort of competitiveness between us, but I think it’s been good for us because I’ve always considered her to be such a fantastic performer since week one,” Nev told ET about his competition.

But even Sasha admitted at this point, it’s anyone’s game.

Do you have a favorite couple? Don’t forget to catch the Dancing With The Stars semifinals this Monday and see who will make it through to the finale. Your votes will help keep your favorite dancers safe! Let us know who you’re cheering for in the comments.