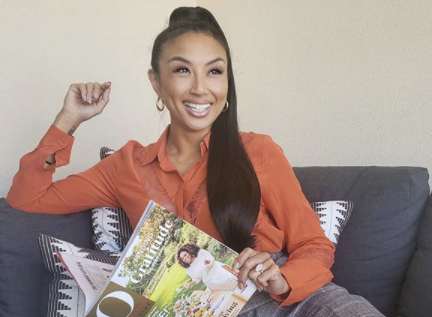 Dancing With The Stars fans know Jeannie Mai left the competition due to a medical emergency. Her fiance Jeezy recently spoke up about how scary the situation was. He sat down with Jeannie’s co-hosts on The Real to talk about it.

According to Jeezy, Jeannie had some pain in her throat. She was on prescription steroids for the situation, but the pain came back after a while. And it got worse from there. Jeannie struggled to breathe. That’s when they knew it was getting really serious.

“I took her to the emergency room and they found something, but they didn’t know,” Jeezy said. “The doctor immediately looked at her and said ‘You’re done with Dancing With the Stars. You’re done. If you don’t get it fixed right now, you could lose your life.’ For me, that was real.”

Fortunately, Jeezy also says Jeannie Mai is recovering well. She’s getting stronger and he even said she eats everything in sight. However, she feels really sad that she had to drop out of the competition.

Sending love and positive energy to Jeannie, who is resting after her surgery. Though she and partner Brandon Armstrong are leaving #DWTS early, we are extremely proud that they performed seven amazing dances. Good luck to the remaining contestants! https://t.co/R7mXTyfSbR

“I am heartbroken that my DWTS journey has to end here. The last several weeks have been an amazing learning experience. I have pushed myself to new limits physically and mentally, and I am so proud of how far we’ve come,” Jeannie told PEOPLE shortly after she withdrew.

“I would never imagine ever having to write this, but I made it safely out of my emergency surgery,” The Real hostess recently shared on Instagram. “…What simply started as a sore throat had unbeknownst to me become a dangerous infection that already closed at least 60% of my airway and resulted in a throat abscess that spread in a matter of 3 days.”

Jeannie Mai’s emergency surgery was definitely for the best. However, fans and DWTS castmates still miss her very much.

While Jeannie recovers, she has plenty of time to plan her wedding with Jeezy. The couple got engaged back in the spring. According to PEOPLE, Jeannie would love to have a winter wedding.

“It’s such a romantic [time for a] wedding, it’s gonna be cold outside, everybody can snuggle up on each other,” Jeannie said. “Jay [Jeezy] and I met on November 28, and it’s a very special time for us. So I’m thinking winter because everything can be really cozy, you can have hot chocolate, spiked hot chocolate, slippers, fuzzy slippers for the dancing afterwards. There’s so many things you can do in a winter wedding.”

That certainly does sound like a lot of fun! Jeannie added that she plans to invite between 50 to 100 people to her wedding. However, the couple may wait until the pandemic settles down to make any concrete plans.

Follow Jeannie Mai on social media to keep up with her progress. Her recovery seems positive, but she could always use some well-wishes from fans.