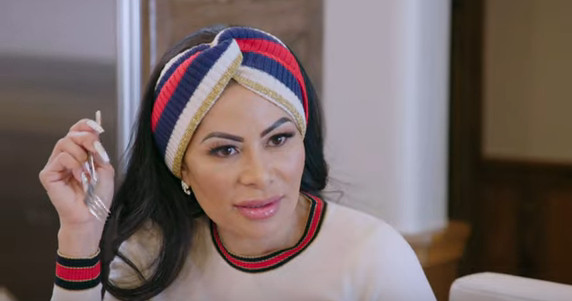 The new Bravo franchise, The Real Housewives of Salt Lake City, kicked off with rave reviews this week. But some fans weren’t happy with the medical misinformation two of the stars shared during the premiere. Jen Shah told her son some very outdated information on the AIDS virus. Then Mary Cosby made a joke about diabetes. Neither misstep went over well with fans on social media.

Bravoholics first learned about a new installment to the Real Housewives at Bravo’s fan convention. BravoCon happened over a weekend in NYC during November of 2019. The network kept the details about the new show close to the vest. In fact, the trailer and official airdate was just announced last month.

On Wednesday, November 11, fans finally got a glimpse of RHOSLC. Overall, the show was a hit with viewers, earning high ratings for the network. But not all Bravo fans were happy with the newest Housewives.

Early on in the RHOSLC premiere, fans met Jen Shah and her family. Jen Shah lives in a literal ski chalet with her husband, Sharrieff and their two children. Sharrieff Jr. is 26, while Omar is just 16-years-old.

During the pilot episode, the family shared breakfast together, during which Jen interrogated her young son about having a girlfriend. Omar said he didn’t have a girlfriend, at which point Jen Shah shared some sage advice with her son. Except her facts were very, very wrong.

She said, “If you kiss a girl, you might be like ‘Oh, she’s cute.’ Guess what, you can contract herpes, probably AIDS.” To be fair, her older son did say he didn’t think that was true.

However, fans took to social media to express their disgust at Jen Shah’s comment. While she likely said it in a joking way to scare her son off of romance, fans slammed it as uneducated and irresponsible, reports Reality Tea.

When the AIDS pandemic first rose in the 1980s, misinformation about how the disease was transmitted caused fear across the country. The belief that only gay men got AIDS or that it was “the kissing disease” led to stigmatizing people who have AIDS. We know now that AIDS is not transmitted by kissing.

One fan wrote that in 2020, that kind of misinformation should not be repeated. Let alone on a television show with a huge audience.

It’s 2020 and a mom says to her son on @BravoTV #RHOSLC #RHOSL that you can get #AIDS from kissing? Where’s the education?

Another person slammed other RHOSLC fans for ‘stanning’ Jen Shah after her comment.

Why exactly are we stanning Jen Shah when she said you can contract AIDS from kissing? Asking for a friend!!

Jen Shah isn’t the only RHOSLC star facing backlash for comments made on the show. As viewers saw, Jen Shah is feuding with her co-star Mary Cosby. The source of the feud is over Mary allegedly saying she “smelled hospital” when Jen Shah hugged her.

Jen Shah took issue with Mary’s statement, defending the stench by informing viewers that she was taking care of her sick aunt. Her aunt ultimately had to get both of her legs amputated due to diabetes.

During a one-on-one interview, Mary Cosby made a joke about Jen Shah’s aunt. She said that drinking more water would have prevented the amputation. However, that is also an incorrect statement. And angry fans took to Twitter to call Mary Cosby out.

The ladies of RHOSLC are getting mixed reactions from social media/ What do you think about Jen Shah and Mary Cosby’s incorrect comments? Let us know in the comment section down below.

Season 1 of The Real Housewives of Salt Lake City airs Wednesdays on Bravo. The network dropped the entire first episode on YouTube! Watch it below