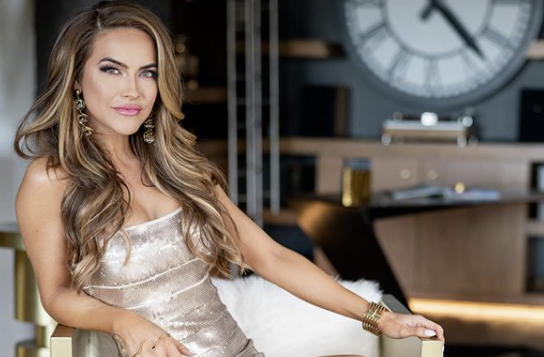 Chrishell Stause went through a highly public divorce of her own. She said in the past it’s the last thing she would wish on anyone. Needless to say, the Selling Sunset star isn’t happy about the rumors surrounding her at the moment.

Chrishell Stause Is At The Heart Of Yet Another Public Scandal

Just days after Chrishell and her partner Gleb Savchenko left Dancing With The Stars, he announced his divorce on Instagram. That alone was a little suspicious, but things got worse when Gleb’s ex, Elena, spoke to the press. She announced that they were divorcing because of Gleb’s years of infidelity and a “recent inappropriate relationship.” Naturally, everyone assumed that meant Chrishell.

Both Gleb and Chrishell publicly announced they weren’t having a secret affair. However, fans will believe what they want to believe. Amanza Smith, one of Chrishell’s Selling Sunset co-stars, recently commented on the situation.

“Poor Chrishell,” Amanza said on FUBAR Radio this week. “She was like, ‘I went through a very public divorce. Like, the last thing she would ever do is add to somebody’s infidelity if that’s what was going on.’ But that’s just how it goes when you are in the spotlight, but I think she’s pretty pissed off about it. … It sounds like maybe the wife is using this as, like, a cheap PR stunt.”

Those are some pretty harsh words for Elena Samodanova, especially since she didn’t specifically say it was Chrishell who split them up. Someone definitely isn’t telling the complete truth here, but no one can be sure who it is.

Meanwhile, Chrishell Stause is trying to be positive about the whole situation. She recently tweeted that she’s thankful for everyone defending her through the chaos and drama.

I wish I could hug everyone of you that support me like this. You’ll never know what it means through all the chaos 🥺🥺🙏🏼 https://t.co/zpzOHbocFI

Now that her time on Dancing With The Stars is over, she really wants to relax. But of course, she’s thinking about her next project and dating life. In previous interviews, the Selling Sunset star said she could be interested in becoming the next Bachelorette.

Chrishell recently appeared on former Bachelorette Kaitlyn Bristowe’s podcast to discuss the possibility. She thinks being the next Bachelorette would be an amazing opportunity, but there is one type of guy she would never go for.

“If I found out they were a cheater in some way, like, they had a girlfriend or that whole thing [that would be a deal breaker],” Chrishell told Kaitlyn. “We see that every season. We find out there’s some girl at home who thought he loved her, you’re out of here. I don’t need to talk about it, we don’t need to have a conversation.”

Some fans think that puts a huge hole in the Gleb/Chrishell rumors, but others think she only said that to deflect some of the gossip. What do you think? Let us know in the comments.