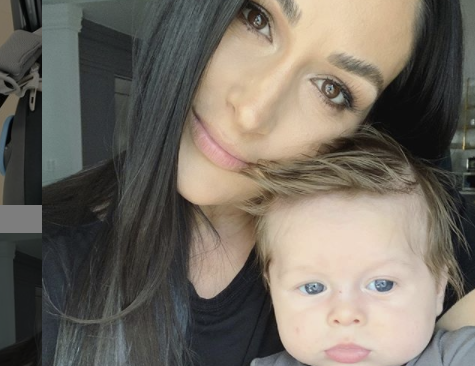 John Cena and Nikki Bella ended their engagement back in 2018. However, it seems like there isn’t much bad blood between the exes. According to the Total Bellas star, John Cena reached out to her and Brie after they gave birth to their sons this summer. And in return, Nikki hopes he has a great life and career ahead of him.

“John and I will be tied forever. I get that, like, we had a public relationship on a reality show for six years,” Nikki told Us Weekly in a recent interview. “All I’ve ever wanted was for him to be happy. So, it makes me happy when I see that and, like, him kicking butt in the movie world and all that stuff. I love that!”

“So with the baby, he reached out to Brie and I both,” Nikki continued. “We haven’t had an individual conversation in gosh, I don’t know how long, but it was very short and sweet!”

John Cena And Nikki Bella Both Seem Happy, Even Though They Split Up

Nikki said the WWE power couple split over the possibility of children. John Cena always said he didn’t want children so he could focus on his career without being an absentee father. However, Nikki always wanted a baby. They both seem really happy now that they have what they want.

Back in January, Nikki Bella got engaged to Dancing With The Stars star, Artem Chigvintsev. The pair met while Nikki competed on the show back in 2017. However, she recently said nothing scandalous went on between the two while they competed on the show. Their relationship only turned romantic after she and John split up. Artem and Nikki welcomed their son, Matteo, on July 31. These days, you can catch Nikki on social media every Monday night cheering her fiance on.

John Cena moved on too. He started dating Shay Shariatzadeh back in 2019. The pair married in a private ceremony on October 12.

Total Bellas Comes Back Tonight For A Brand New Season

🗣️ #BellaArmy! 🗣️ The @BellaTwins are here to answer some of your burning questions ahead of tonight's #TotalBellas season premiere at 9/8c on E! ✨

Fans know they are in for a really exciting ride this season. Trailers teased the season will cover the birth stories, which everyone is dying to know about. We all now know that the mothers and babies were all fine, but there were definitely health scares and bumps along the way.

Tune in at 9 PM and keep up with your favorite sisters! Let us know what you think will happen in the comments below. Follow us on social media for more stories on Brie and Nikki Bella.