Lindsie Chrisley Campbell took a huge dig at Todd and Julie Chrisley regarding Thanksgiving on Instagram a few days ago. The reality TV star alum was celebrating not having to stress making arrangements to head to her parents house for the holidays.

While Lindsie Chrisley is technically the product of Todd and his first wife, Teresa Terry. Most assume she was referring to Todd and Julie Chrisley’s house with her post. Or, perhaps, she is celebrating not going to Todd or Teresa’s houses for the holidays.

What exactly did the Chrisley Knows Best alum have to say about her parents? Keep reading to find out.

Having no relationship with Todd and Julie Chrisley seems to have simplified things for Lindsie Chrisley Campbell around the holidays.

“M O O D knowing I don’t have to show up to your parents house on Thanksgiving.” She penned at the very beginning of her Instagram post.

Over the years, the social media influencer has learned things never go according to plan. But, things always seem to work out.

During this week’s podcast with Kailyn Lowry, Lindsie opened up about questions she gets during the holidays. Fortunately, navigating who to spend them with isn’t too difficult when you have no relationship with your parents. 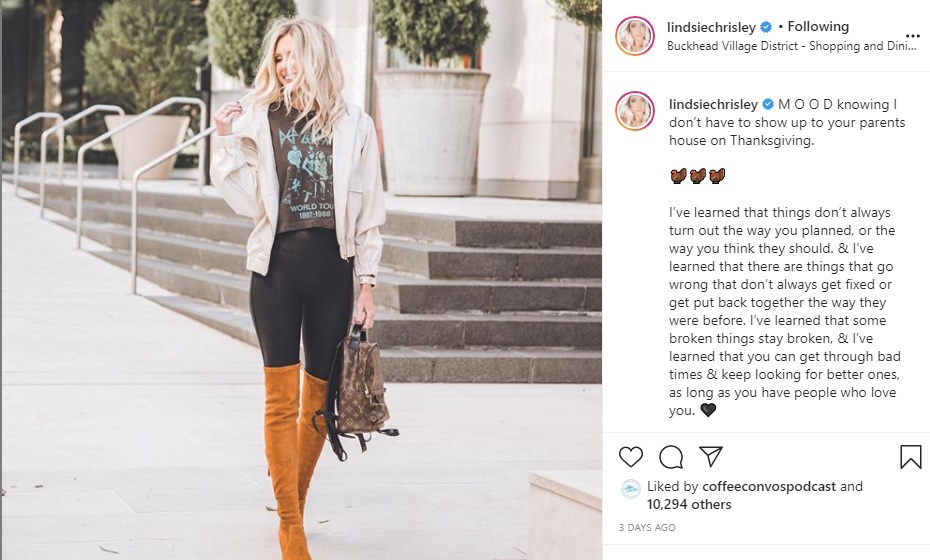 Her lack of relationship with Todd is a two way street

Lindsie Chrisley Campbell has always been pretty adamant that her lack of a relationship with Todd is a two way street. She has mentioned on Instagram multiple times that her father makes no attempt to reach out to her. And, she doesn’t understand why it must fall on her to make amends.

Despite the fact that the post clearly took a dig at Todd and Julie Chrisley, her followers did not bring up the subject in the comments. It appears as if her followers are beginning to respect the fact that she has no interest in continuing to discuss her lack of a relationship with them.

In fact, the comment section was filled with love and support. Many opted to keep it simple by discussing and asking questions about Thanksgiving. Do you think it is sad that her son Jackson doesn’t get to see Todd Chrisley around the holidays? Share your thoughts with us in the comments.