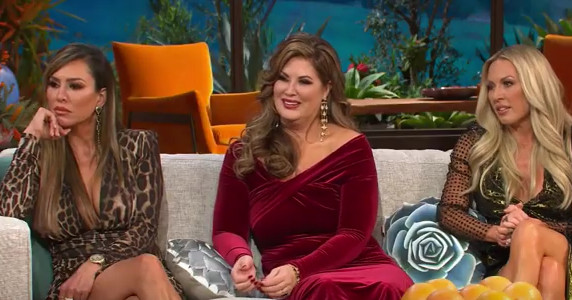 Well, that was unexpected! The Real Housewives of Orange County fans saw tensions brewing between Braunwyn Windham-Burke and Gina Kirschenheiter. But now Kelly Dodd has jumped feet first into the fray. She recently took to her social media to call Braunwyn out on several different levels, including calling her co-star a ‘loser.’

Throughout the coronavirus pandemic, Kelly Dodd has faced backlash for her comments and actions during the global crisis. One notable complaint from fans is that the reality star traveled back-and-forth between L.A. and NYC regularly. In fact, Kelly’s mother took care of the RHOC star’s teenage daughter for several months during that time period.

At the time, fans slammed Kelly for “abandoning” her daughter for a man. Kelly’s now-husband, Rick Leventhal, is a Fox News correspondent based out of New York City. So, Kelly traveled to NYC frequently to spend time with him.

But now it’s come to light that her co-star, Braunwyn Windham-Burke, also traveled during the coronavirus and she did it without any of her seven kids. As Braunwyn openly talks about on RHOC, she employs two nannies to help out with the kids, Us Weekly reports. During a recent episode, she even admitted that she often dumped her kids off on the nannies when she was hungover.

During the Season 15 premiere, Braunwyn admitted to the cameras that she is an alcoholic. In subsequent episodes, her alcoholism continues to be the main topic of conversation.

In a social media post, Kelly Dodd slams Braunwyn as a hypocrite. Moreover, she can’t wait to face off with her co-star at the reunion. Kelly plans to confront the mom-of-seven for her behavior. Online fan account @realhousewivesfranchise shared a screenshot of Kelly’s post. At the end, she promises to “eat [Braunwyn] alive” at the reunion.

Hypocritical Braunwyn is a ‘Phony’ and a ‘Loser’

If you think Kelly Dodd would let it rest there, you don’t know Kelly Dodd. The Positive Beverage founder kept the feud going with a new post to her Instagram. In the post, she alludes to her putting Braunwyn’s license plate and address out to the general public. However, Kelly defends herself by saying it was an out-of-state residence.

Comparably, she questions if Braunwyn calling her a racist and homophobic is more dangerous than a “dark house” and Florida license plate.

What do you think about this emerging feud between Kelly Dodd and Braunwyn Windham-Burke?

Artem Chigvintsev And Nikki Bella Celebrate Their Son’s First Birthday
‘You, Me, And My Ex’ Alex Hines STILL Defending Relationship With Caroline
Lifetime’s Thriller ‘Burning Little Lies’ Is Not A Fairy Tale
Lisa Rinna Stars In New ‘Days Of Our Lives: Beyond Salem’ For Peacock
‘Love Island USA’: Flo Wants To Be The Only Girl On Will’s Lips