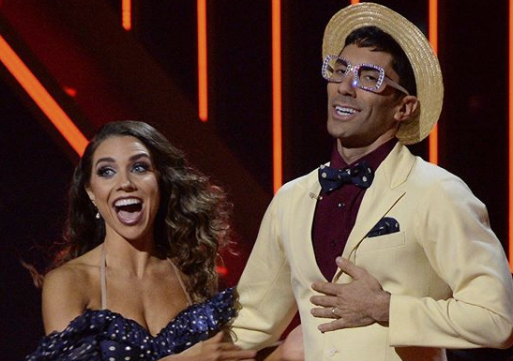 On Monday night, Dancing With The Stars heads into the semifinals. And get ready — it’s going to be a double-elimination episode. The November 2 episode was supposed to feature a double-elimination. However, only one couple went home after Jeannie Mai dropped out due to her medical emergency.

In case you missed last week’s episode here’s what you missed. Backstreet Boy AJ McLean and Cheryl Burke left the competition, leaving the final six couples to compete in the Dancing With The Stars semifinals. They are:

Many fans think Nev or Kaitlyn will be the stars to win it all. What do you think? Let us know who you’re rooting for in the comments.

Dancing With The Stars Features Multiple Rounds Again This Week

Like the last several episodes, this episode will feature multiple rounds. In the first round, competitors will have a chance to try a style they struggled with in previous episodes. During round two, the pairs will tackle a style they haven’t tried before.

In the redemption round, Kaitlyn and Artem will revisit the Paso Doble to “Hanuman” by Rodrigo Y Gabriela. Next comes round two, and they will perform a Contemporary number to “Cowboy Take Me Away” by The Chicks. Last week, they earned a perfect 30 from the judges. Can they keep up the great work?

I STILL CANT BREATHE. And it’s not my sore rib. It’s my joy. https://t.co/oLqChlwXYJ

Johnny Weir and Britt Stewart also had a perfect score last week, but that didn’t keep them out of the bottom. The judges chose to save them over AJ and Cheryl, so they have to perform well this week. They’re going to dance the Salsa in round one to “X” by the Jonas Brothers featuring Karol G. In round two they will dance a Jazz routine to OneRepublic’s “I Lived.”

Justina Machado and Sasha Farber have been top contenders since DWTS began this season. They will revisit the Tango and perform to “El Tango de Roxanne” from Moulin Rouge. In round two, they too will perform a Contemporary routine to “Holding Out For A Hero” by Bonnie Tyler and Ella Mae Bowen.

And There Is Plenty Of More Action Planned

Nev Schulman and Jenna Johnson are going to retry the Foxtrot to “Sign Of The Times” by Harry Styles. Afterwards, they too will have a Contemporary routine. Their second routine will be to “If The World Was Ending” by JP Saxe and Julia Michaels.

Nelly and Daniella Karagach haven’t earned the best marks from judges, but fans love them and keep them in the competition. Their redemption routine will be the Paso Doble to Woodkid’s “Run Boy Run,” followed by a Jive routine to “Jump Jive An’ Wail” by The Brian Setzer Orchestra.

Skai Jackson and Alan Bersten were in the bottom a few weeks ago but seemed to redeem themselves recently. Their redemption routine is a Cha Cha to Junior Senior’s “Move Your Feet.” Their new routine is a Viennese Waltz to “Lonely” by Noah Cyrus.

Remember, if you want to keep your favorite dancers in the competition, you need to vote for them. Your votes will determine who makes it through to the final Dancing With The Stars episode, and who goes home. And the stakes are really high this week since two couples will leave. Who are you betting will win it all? Stay tuned to find out.

Chrishell Stause Vacations In Paradise With Her New Man — Who Is It?
‘B&B’ Spoilers: Kimberlin Brown Breaks Silence About Finn Storyline Is Sheila Back?
Ashley Iaconetti Of ‘BIP’ Shared What Scared Her Early In Pregnancy
Courtney Waldrop FINALLY Completes Forgotten Memory: See Photo
Chrishell Stause Gushes Over The Bouquets Jason Oppenheim Gifted Her