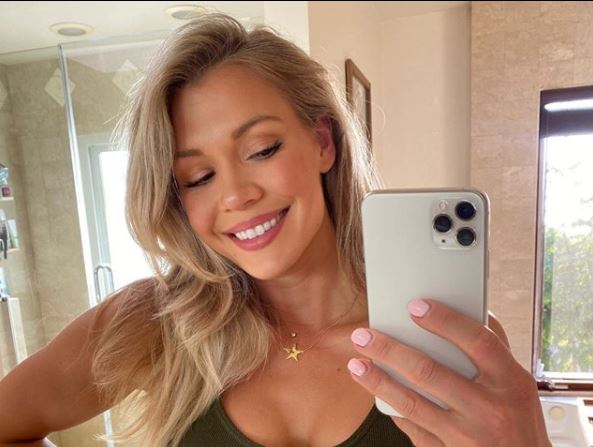 It turns out that Krystal Nielson of Bachelor in Paradise is expecting her first child. The reality star shared the news today. Us Weekly shared the details about her baby on the way. She was with Chris Randone for a while, but he isn’t the father. She has moved on and has a new boyfriend in her life.

Now, Krystal Nielson is sharing the news on her YouTube channel. She posted saying, “The best things in life happen unexpectedly. The best stories began with, ‘And then all of the sudden.’ The best adventures are never planned. Free yourself from expectations. The best will come when you least expect it.”

She shows taking the pregnancy test on the video. You can see her realizing that she is pregnant and how super excited she is about it.

Who is the father?

Back in February, Krystal and Chris decided they were done. At the time they shared the below statement.

“It hurts to announce that at this moment, we have mutually decided to separate. Never did we imagine this scenario, but we’ve come to a point where we both need to work on ourselves. We are best friends that love and care for each other so deeply. We’ve appreciated everyone’s love and support so far throughout our journey and we just ask that you please respect our privacy as we navigate through this.”

Krystal Nielson is expecting a child with her new boyfriend that she has moved on with. She is now dating her new boyfriend Miles Bowles. The two seem pretty happy and serious. She was trying to have a baby with Chris, so you can assume Krystal also was trying once again. She has the comments turned off on her YouTube video so nobody can ask her any of those questions.

Back in October, it was revealed that she was dating someone new. Krystal was seen kissing her new man Miles. At the time, she shared a picture of her kissing Miles and they were doing great. It looked like she was really happy and moving on. She shared at the time that she had been dating Miles a bit before sharing the news. It is great news that she has a baby on the way now. It looks like everything is falling together for Krystal Nielson.

Don’t miss new episodes of Bachelor In Paradise and The Bachelorette on ABC.