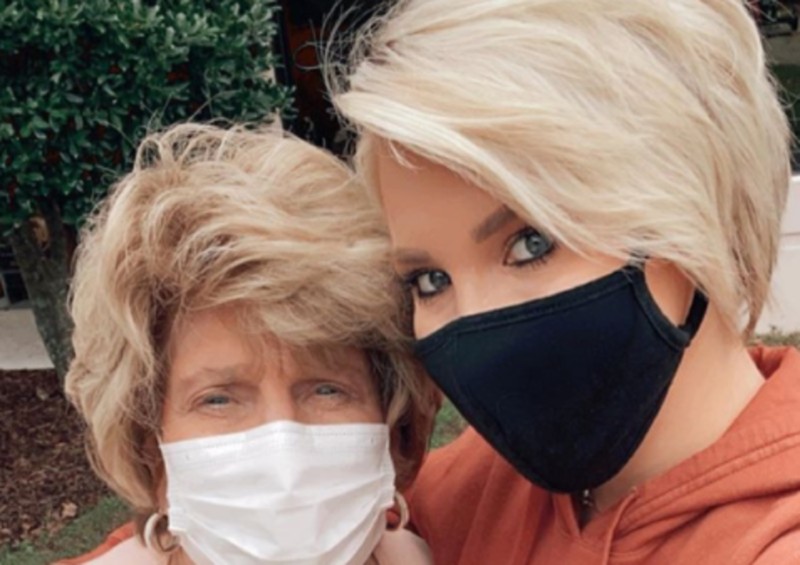 Savannah Chrisley took to the ‘gram to share how she gets her signature hairstyle. She showed fans how she dries and styles it plus all the products she used. The video was an extension of a video she posted earlier. In the earlier video, she showed her hair stylist and best friend, Chadd Bryant, coloring her hair.  The two also joked around and addressed rumors they were dating. Chadd said he doesn’t “swim in the lady pond.”

She captioned the video, “When your bestfriend is also a great hairstylist @chaddlife you get the perfect blonde and a whole lot of laughter!”

In the new video, Savannah is showing how she styles her short hair. She stated she doesn’t always have Chadd around so she learned to do it herself. She walks through each of the drying and styling tips as she goes. That’s not what fans were focused on in the video.

Fans Wanted To Know About The Mask

Savannah Chrisley is wearing a mask in the video. Fans who didn’t watch the previous one assumed she was at her home. Chrisley was in a salon and there were other people present.

One comment said, “why are u wearing a mask in your own home?” Several others asked the same question and Savannah responded to one of them that she wasn’t at home, but in public with people.

One person asked if she wore a mask there, why she couldn’t wear one on Halloween. A couple of her followers made it political. One fan said, “Those asking why she’s wearing a mask clearly didn’t watch the whole video.”

Chadd Bryant was in the background dancing and complimenting himself on her dye job. When she showed how she liked to tease the back, Chadd said, “she likes to take her hair out.” He didn’t approve of her technique but Savannah’s hair did look her signature sassiest.

Savannah Chrisley only responded to one comment about the mask. She rarely responds to people who throw hate on her social media. Followers have trolled her for everything from her split with Nic to her short shorts on one of her Instagram posts.

A post of her and Nanny Faye caused a huge debate among her followers. The post of the two showed them in masks and Savannah said her grandmother voted for the first time in her life. Followers from both sides spit hate and insults back and forth on the picture showing the divided nation even in simple comments.

Savannah will most likely be busy with the launch of her cosmetics line. Fans are hoping she shares more beauty tips as her makeup rolls out in time for Christmas. Chrisley Knows Best returns on Thursday, November 12.