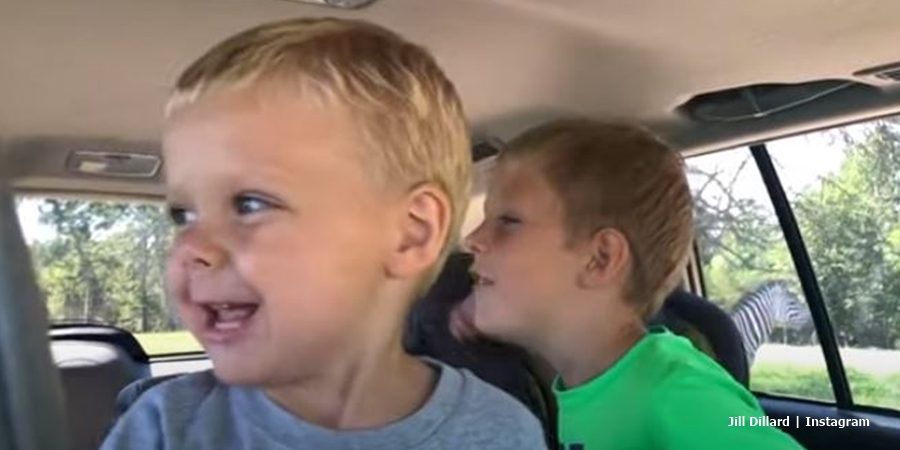 Jill Dillard and her husband Derick recently returned from their beach vacation. And they shared all about the kids. One highlight came when they took a ferry ride. Samuel claimed he’d catch a fish with his hands then eat it. That never happened, and Israel seemed sad as they didn’t see any dolphins. But, they extended their vacation time after the beach trip. And, Jill and Derick cracked up at the comments when they visited Gentry Arkansas Safari.

As the video opens, fans see that Israel seems excited. But, little Sam seems more reserved. He never seems overly convinced about good things until he sees them for himself. The first stop came when the family reached the Lemurs and cat cages. But, Sam just said he saw a shark in the pond. However, when they moved into the open area where antelope and other animals roamed around, the boys became more interested. Actually, that brought a gorgeous smile to Samuel’s face.

Jill Dillard revealed that Derick talked about the buffalo and how many more since existed in the USA. And then, Israel exclaimed because a deer stood in the road. Slowly, Derick crept past it and then stopped alongside. And Sam just loved it. However, Jill reminded them not to put anything out the windows which they kept at 3/4 closed. Jill commented that the smile on Sam’s face said it all.

Funny comments from the kids

Next, the Counting On alums spotted some camels. And Israel really liked that. Derick said he just asked about camels recently. So, now he saw them in the flesh. When the family came across an emu, it looked right in the window. And, Samuel declared, “No! I don’t want him!” And, he pleaded for them to leave. So, Jill Dillard agreed that they should move on. Little Sam spotted the zebras first and yelled it out happily. But first, another Emu came along, so he started talking very quietly.

The kids seemed fascinated with the zebra, and Samuel gave a running commentary But, then TLC alum, Jill freaked out as another Emu crept upon them from the other side of the car. But, the boys relaxed when the naughty emu went to another car. Those Emu’s really won’t go down as Samuel’s favorite animal. Jill Dillard then filmed them approaching the camels. Then, Isreal said they might spit on them, which made Sam afraid. And, he declared he preferred the “sheeps.”

Many more family fun scenes came and Jill and Derick cracked up at the kids. You can see the whole video below:

Fans of Counting On alum Jill Dillard, love it when she posts up their adventures with the boys. In the comments, one TLC fan noted, “Your boys are so cute! Sam is just adorable! Isreal is so handsome & smart! Looked like a great family time was had by all 4 of you guys. Im glad you are happy & doing things your way!