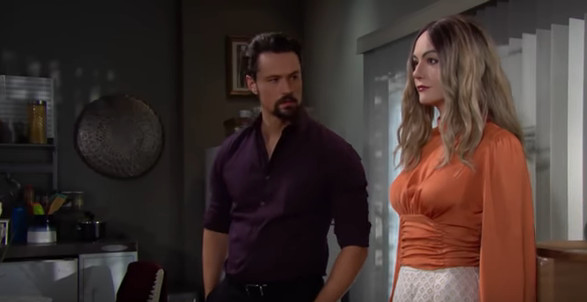 2020 has been a wild year so far. The Bold & the Beautiful’s outlandish new storyline seems a fitting way to end the year. Taking a cue from the Andrew McCarthy/Kim Cattrall 80’s cult hit, Mannequin, the soap is involving a doll into a love story.

Obsession is the bread-and-butter of soap operas, but the CBS sudser is taking it to a whole new level! As teased by EP Brad Bell in August, one of the mannequins would become the story. Due to COVID guidelines, the soap opera implemented a policy of using mannequins in scenes where social-distancing wasn’t possible.

As a fashion designer, Thomas has access to mannequins in the showroom. So, he took one home and dressed it up as Hope. But now the mannequin has taken on a life of its own in Thomas’ mind – literally!

In a recent episode the Hope mannequin encourages Thomas to kill Liam. After bursting into Thomas’ apartment, Liam saw the creepy doll. He promptly let the real Hope know about it. When she went to her ex-husband’s place to check out her likeness, the mannequin began urging Thomas to have s*x with the real Hope. “Take her,” the mannequin repeated to Thomas.

Will Thomas do what the mannequin says and force himself on his ex?

Actor Watched Lars and the Real Girl For ‘Inspiration’

Blow-up dolls and mannequins are the butt of the joke in many comedy movies. The actor who plays Thomas, Matthew Atkinson, did his research by watching one such movie. During an interview with Soap Opera Digest, the actor cited Lars and the Real Girl as his “inspiration.”

The 2007 romantic comedy starred Ryan Gosling as a loner in love with a mannequin.

The coronavirus pandemic shut down television production for months, including soap operas. While B&B had a few months’ worth of episodes in the can, they eventually ran out. Along with The Young & The Restless and General Hospital, the daytime drama dipped into the archives for throwback episodes.

In June, B&B was the first television show to resume production. But it came with very strict guidelines, including social-distancing. That meant actors had to stay six-feet apart in scenes, which made it impossible to film love scenes.

So, to overcome that hurdle, the soap started using mannequins instead. In some cases, an actor’s real-life spouse stood in for the scene. The scenes were then pieced together using editing.

The Thomas/Hope/Mannequin Hope love triangle has to be seen to be believed. Check out a clip of Hope meeting the mannequin down below.

The Bold & The Beautiful airs weekdays on CBS.