The Plath family is growing! Kim and Barry Plath are preparing to welcome their first grandchild. Which of the Welcome to Plathville stars is expecting a baby?

Hosanna is Kim and Barry’s eldest daughter. She and her husband Timothy tied the knot in June 2019. Now, their little family is expanding with the arrival of a new baby right around the corner.

There are few details about the pregnancy. But, it seems like Hosanna and Timothy’s child will be born later in November. So far, they have not publicly revealed the due date or whether the baby’s a boy or a girl. Fans of the show also don’t know what names the couple has in mind for the baby or any other details. Hopefully, Welcome to Plathville fans will get an update when the baby arrives. Perhaps Ethan, Olivia, Moriah, or Micah Plath will post about the baby’s birth.

Why aren’t Hosanna and Timothy on Welcome to Plathville?

Fans may not recall Hosanna and Timothy’s names, as they aren’t on the TLC show. They have been mentioned briefly, and they are in some of the family’s photos. But, they have not been featured on the show.

It’s unclear if there’s another reason the couple isn’t a part of the family’s show, but it’s likely due to the distance. Kim and Barry live in Georgia with their kids. Hosanna and Timothy live in Ohio.

Based on the rocky relationship that fans have seen between Kim and her daughter-in-law Olivia, it wouldn’t be much of a surprise if there were other problems with the family’s dynamic.

Because Hosanna and Timothy aren’t on the show and don’t have a social media presence, it’s difficult to find out more about the baby on the way. You can see Hosanna’s baby bump in this photo from Nurie Rodrigues and Nathan Keller’s wedding. 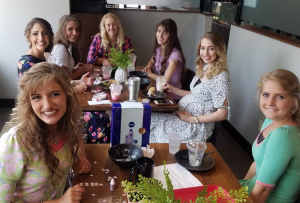 It’s unlikely that another Plath will be welcoming a baby anytime soon. While Ethan and Olivia want to have children someday, they are enjoying their lives as a married couple. They have been branching out and trying new things as Ethan steps away from his parents’ strict belief system. This doesn’t mean they will never have kids. They have simply revealed that they are waiting.

So, are you excited to learn that Hosanna and Timothy are expecting a baby? Share your thoughts below.

Welcome to Plathville returns to TLC on November 10.