Many are doing a double take after Reba McEntire posted a black and white Instagram video less than a week ago that appeared to have Todd Chrisley in drag in the background. Now, the possibility of the individual standing next to Reba being Todd Chrisley in drag isn’t too farfetched of a theory. After all, this wouldn’t be the first time Chrisley Knows Best fans saw Todd dressed up as a woman.

Todd Chrisley has dressed in drag before, Julie loved it

The idea of Todd Chrisley in drag isn’t too farfetched. Fans may recall he dressed as a woman and surprised his mother, daughter, and wife while they attended Drag Queen Bingo. Fans got to experience Todd in drag as it happened during an episode of Chrisley Knows Best titled “Go Flip Yourself.”

Fans swear the individual in Reba’s video looks like him.

Now, Reba McEntire shared a video a little less than a week ago that featured herself and another individual. Her Instagram followers were a little confused on whether the individual was a woman or a man in a wig. But, there is one thing many of her Instagram followers were sure of. They believed it was, in fact, a man in the photo with her. And, some even believed they knew who the man was. Several of her followers insisted the individual was clearly Todd Chrisley in drag.

Many took to the comments happy that someone pointed it out. Why? Because they wondered if they were crazy for thinking the individual looked like Todd Chrisley in drag. 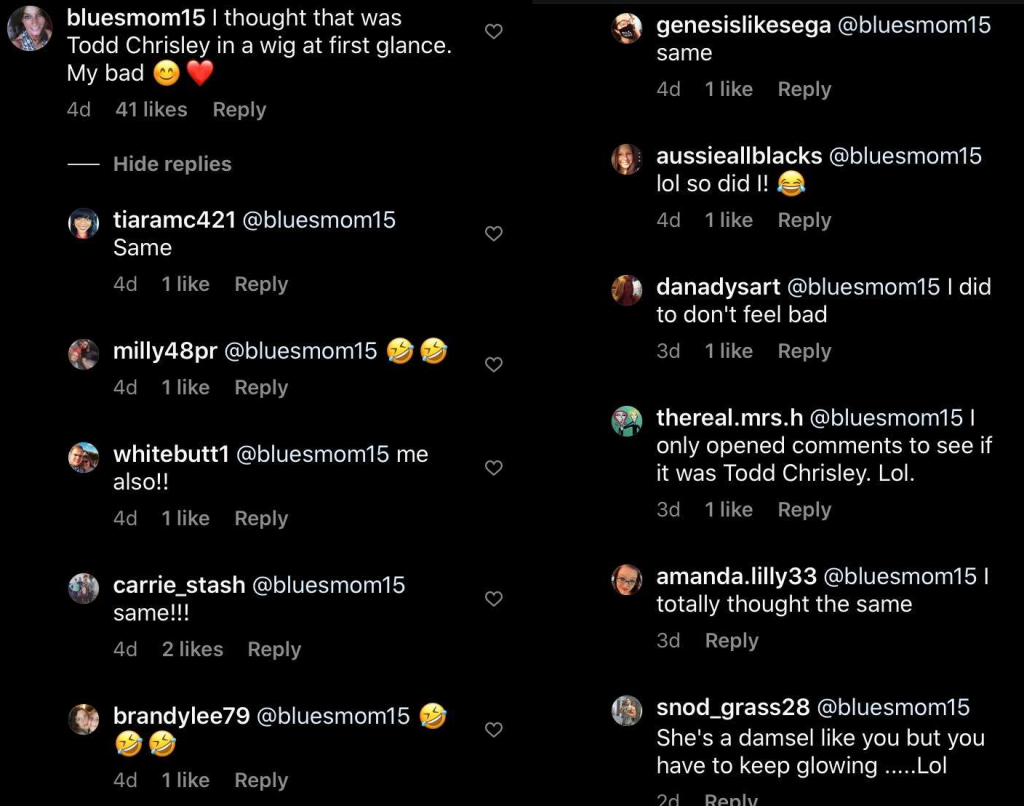 As you can see from the screenshot above, there were tons of individuals who thought the individual was Todd. Some even comforted the person who originally speculated it was Todd “not to worry” because they thought the same thing.

Now, Reba McEntire never did identify the individual in the video. She also never responded to speculation that it was Todd Chrisley in drag. The question is: do you think the individual looks like Todd in a wig? Share your thoughts with us in the comments.

Is ‘Below Deck Med’ Courtney Veale Afraid Of Hannah Ferrier?!
Lindsie Chrisley Implies Todd Chrisley Stirs Drama, Lies For Views?
See Jinger Vuolo’s SHOCKING Before & After Transformation Photos
Lisa Rinna Stars In New ‘Days Of Our Lives: Beyond Salem’ For Peacock
How Many Episodes Are In ‘When Calls The Heart’ Season 9?