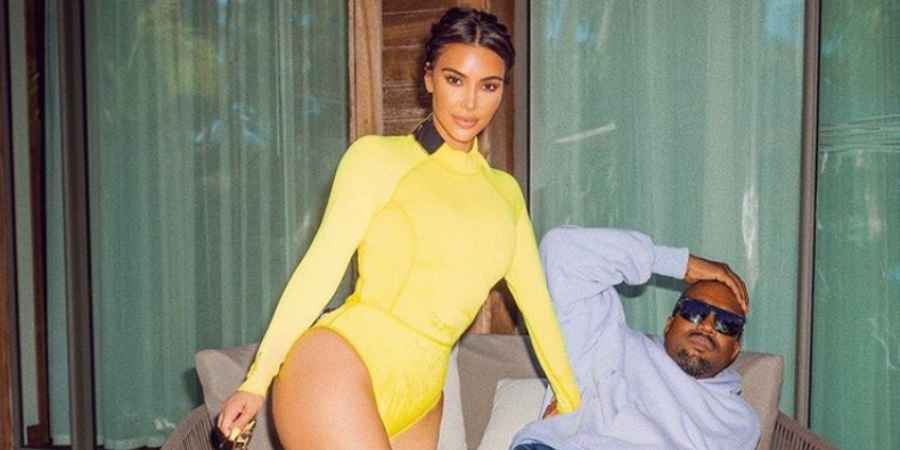 It is likely there are rumbles in the Kim Kardashian and Kanye West household lately. This is after Kim shared her support for Joe Biden and Kamala Harris in their win in the US election 2020. Kanye was also a candidate but regrettably did hopelessly badly in the polls. So much so, he dropped out of the race early but isn’t completely giving up.

Yesterday the announcement came that Joe Biden and Kamala Harris were to become the next President and Vice President. Kim Kardashian, 40, was quick to share her support for Biden and Harris in their win. On Twitter, she shared an image of Biden and Harris holding hands in front of the American flag. Her simple caption was three blue hearts.

Kim wasn’t alone, as her sisters Kourtney, Kylie and Kendall all shared posts relating to Biden and Harris’ win on their Instagram Stories. This is, of course, despite the fact that Kim’s husband, Kanye West was also a candidate for the presidency.

Kanye West and ‘The Birthday Party’

West ran for the top job by creating a political party titled “The Birthday Party.” It turned out the rapper did manage to scoop a small proportion of the votes – reportedly around 60,000. However, he decided to concede on the first day of the election.

However, he is not totally out of the running. While conceding, he took to Twitter sharing what looks like his intention to take part in the 2024 US election. He did that by writing, “KANYE 2024.”

Kanye West received around 60,000 votes in his self-serving presidential bid and has already threatened to run again in 2024 https://t.co/AgSURw8UKg pic.twitter.com/cUzIhmoeVZ

However, since the results of the presidential election were announced, Kanye has been silent. No doubt his fans are wondering just how bad his mood is today.

While the Kardashian sisters had kept quiet about their choices during the election, they did encourage their many followers to vote. However, once the announcement was out, Kim made her choices very clear. She shared several posts to her Instagram Stories, praising Biden and Harris.

For her part, Kourtney shared a video shared by the president-elect after the announcement. Meanwhile, Kendall Jenner tweeted about the result, with the caption, “i’m emotional, relieved, and filled with joy this morning!!!” As for Kylie, she shared an image of Vice President-Elect Kamala Harris to her Instagram Stories.

i’m emotional, relieved, and filled with joy this morning!!! 💙💙💙💙

There was plenty of controversy over Kim’s recent 40th birthday party on a private island. Despite the hate she has received over the expense, she continues by showing off her dress. We just have to hope her support of Biden and Harris in their US election 2020 win will put her back in favor with her fans. As noted by Cosmopolitan, for Kanye, well, that might take a bit more time!