Did you know Zoey 101 alum Paul Butcher has an account on TikTok? If you don’t recognize the name, he’s best known for his role as Zoey’s younger brother Dustin Brooks in the hit Nickelodeon series. Today, the actor doubles as a musician. He just recently released a new song titled “Freaky” that he has adamantly encouraged his TikTok following of nearly one million to go check out.

Despite having a little under one million followers on TikTok, Paul Butcher kicked it with just under 300 live viewers on the social platform tonight. Unfortunately for Paul Butcher, the live stream was not well-received by some of his followers.

In the description of his live broadcast, the Zoey 101 alum noted he would be following some of his top gifters. He made it a point to continue to remind those tuning into his broadcast of this offer throughout the live stream. There were several moments in the broadcast where the 26-year-old more or less begged his followers to send him candles. Now, for those who aren’t familiar with the TikTok platform, the candle is the most expensive gift you can send during a TikTok Live.

As you can see from the screenshots below, it would cost between $40 and $50 to send a luxury candle to the actor as a gift. 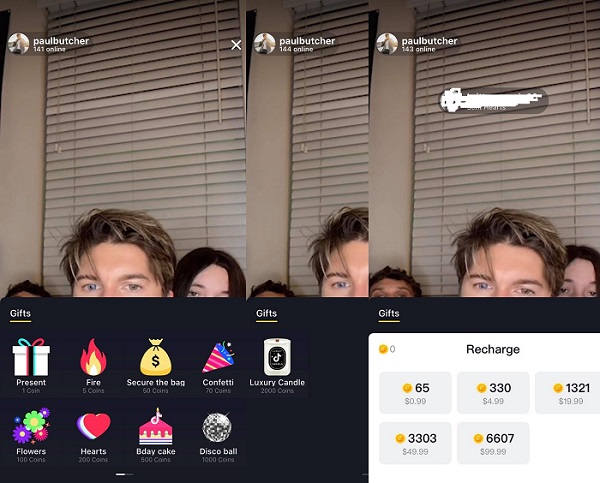 Paul Butcher did receive gifts from his followers, including a candle

Paul Butcher did receive a fair amount of gifts as his live progressed. Toward the end of his live, he even had a few followers send him the luxury candles he continued to beg for. One luxury candle gift caused him to break out into song. He sung a song from Zoey 101 sung by his character Dustin called “Gummy Worm Blues.” Ironically, the lyrics of the song talk about being broke and needed cash.

He thanked his followers for “spoiling him.” Paul Butcher continued to announce what time he would exit the live. The time would pass and he would stick around longer because people were still sending him gifts.

As you can see from the screenshot below, Paul Butcher ended his TikTok Live netting just under 30,000 gift points. This works out to be between $400 and $500 in gifts. 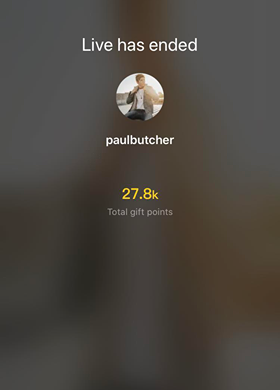 Now, TikTok does take a pretty steep commission of 50 percent. But, earning $200-$250 for sitting on a couch and begging people to send him gifts isn’t too shabby.

Paul Butcher’s net worth: is he hard up for cash?

Overall, there’s no way for us to know if Paul Butcher is or is not struggling for cash. But, he was begging for cash (in the form of TikTok gifts) throughout his entire live.

According to Celebrity Net Worth, Paul Butcher has a net worth of $500,000. So, it is unlikely that he’s hurting for cash. Which only makes his followers wonder more why he was begging for cash during his live.

You can watch a six minute snippet from the live stream below or by clicking here.

The real question is simple: what do you think about Paul Butcher begging his TikTok following for gifts? Did it feel weird to you? Share your thoughts with us in the comments.