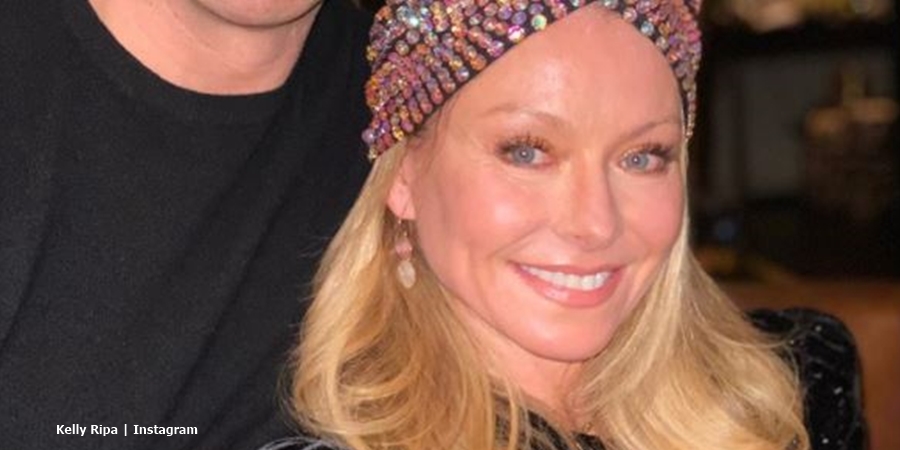 Kelly Ripa works in the media and many critics slammed her when she posted up about Biden and Harris winning the White House. Mainstream media called the election a Biden win but President Trump vowed it’s “not over.” Obviously, he plans on contesting the outcome. So, Trump fans told off Kelly and accused her of calling it prematurely.

On November 3, Kelly Ripa called herself “hideous” during the LIVE with Ryan and Kelly show. She only joked though. But, many of her followers now think that she might fit the term “hideous” for real. While she’s not the only Democrat celebrating, people who disagree with a Biden win seem particularly angry on her Instagram. Mainly, it seems because she celebrates before the election’s officially ratified.

One follower noted, “Being part of the media, I think you should know that media cannot call an election! With that being said, I’m a veteran and respect the man in office whether I agree with him or not, let’s hope that no matter which way this actually turns out. After it is OFFICIALLY called, [everyone] can have that same mindset.” While that sounded reasonably non-trollish, others came out very angry.

Kelly shared an extract of the votes that showed Biden win by 273 to 214 over Donald Trump. Screenshot from the New York Times, she left no caption. Well, other than a hashtag that said “#mood.” Then, many people chimed in saying that “the media doesn’t decide.” One of them commented, “Media can’t pick our president. This is far from over….. too many concerns over voter fraud. There will be audits done before a president can be officially announced…”

Kelly Ripa also received a lot of comments about unfollowing her. But, the theme continued with another person writing, “Not so fast. The media doesn’t decide this election. Rampant fraud.” And, others reminded Kelly that “Al Gore” was a thing.

Plus, other people accused Kelly and her supporters, suggesting they just celebrate now so they can claim “rigging” when Trump wins in court. And, yet another person chimed in with, “the media doesn’t get to decide who won the presidential election. There’s recount and court cases still on.” 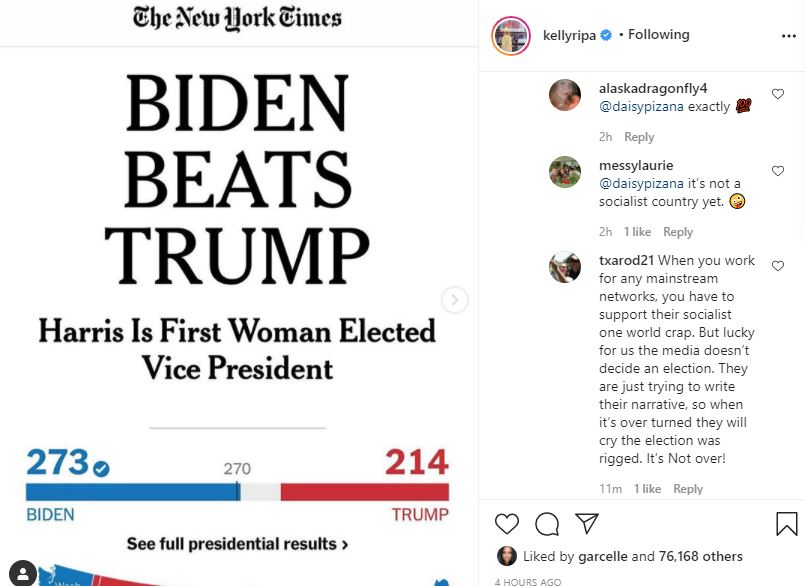 Biden supporters celebrate their win, tell people to move on

No matter how this all turns out at the end of the appeal process, some of the Biden supporters called for unity and peace. But when others told Trump supporters to suck it up and “get over it,” some of Kelly’s followers slammed them too. After all, they argue, the Democrats never got over losing to Trump.

International leaders also call the Biden-Harris win and congratulations are pouring in. CNN mentioned Canada, France, Ireland, and even Boris Johnson from the UK congratulated Biden. So clearly, Kelly Ripa’s not the only one who feels they ran the race fair and square. It certainly looks like these arguments on social media will continue for some time yet. Your thoughts? Sound off in the comments below.