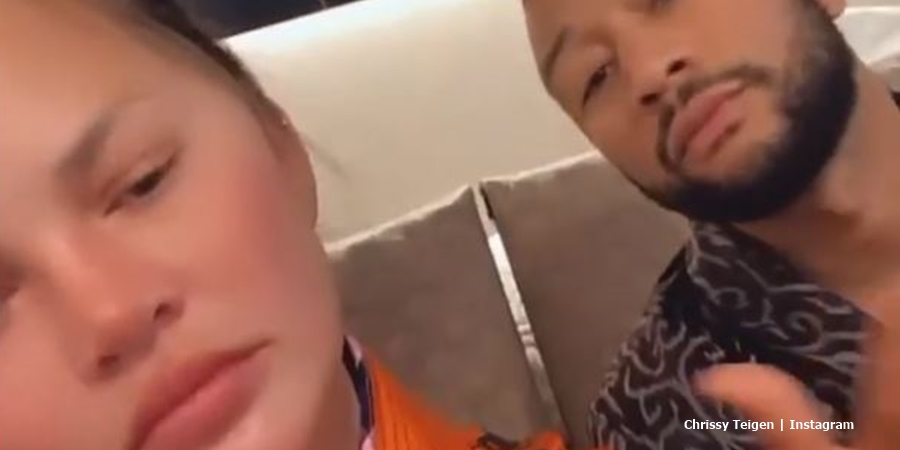 Chrissy Teigen and her husband John Legend celebrate the media calling the election for Joe Biden. She mocked the whole Trump family and tagged them individually, except for Tiffany. But, maybe she didn’t like the comments by people, who thought her “classless.” She came back soon after posting, and declared a “BLOCK PARTY.”

We reported that Chrissy Teigen took a  lot of heat in the run-up to the elections. Back in May, she donated $100k to bail out arrested protesters after George Floyd died. And, when people slammed her, she doubled the amount. But these days, she seems less inclined to tolerate people who slam her for being liberal.

When the mainstream media called the presidency as won by Biden, like many other celebs, she celebrated it on Instagram. Across social media, pro-Trump supporters deny it’s over, as courts and recounts still need verification.

In the video that Chrissy Teigen shared, she and John sat together and swayed to anti-Trump music. Clearly, she mocked Donald Trump. Then, she tagged “@realdonaldtrump @ivankatrump @jarredkushnerofficial @erictrump @donaldjtrumpjr.” After that, she commented again, saying, ” didn’t tag Tiffany because I feel like there’s still hope for her. I mean she’s in deep but there’s one acrylic nail tip, sticking straight out the ground.”

Out of the thousands of comments, a comparatively small percentage of people snuck in something nasty about Chrissy. And, it seemed clear that some blocking must be going on. After all, other celebs get slammed more for doing less mocking. And, Chrissy then commented, “BLOCK PARTY.” Obviously, she doesn’t see any issue with blocking people, as her social media following is huge.

Here are some of the comments by people who loved Chrissy Teigen mocking the Trump family:

But, some Chrissy Teigen followers thought she took a “cheap and unclassy” route to celebrate her hoped-for Biden win. 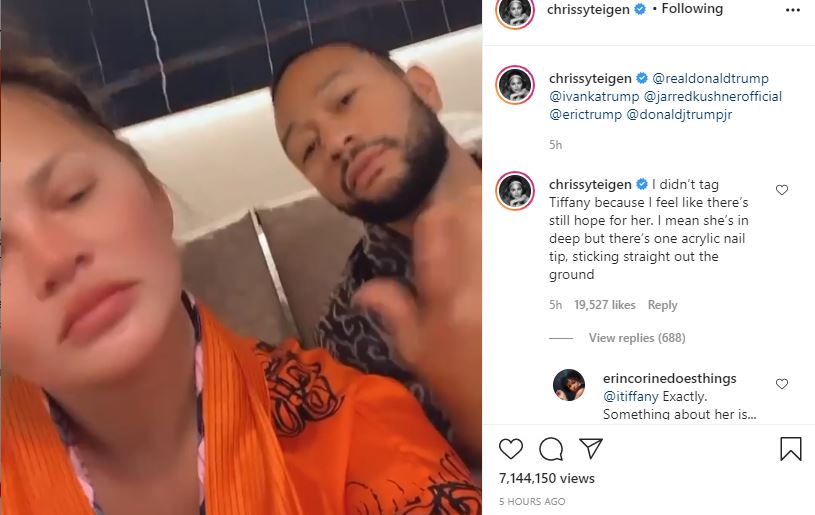 Some people think that Chrissy really acted in a bad way. One follower wrote, “John should be removed from the Voice! That would be like Blake Shelton running around saying f Biden, but he apparently has more class!” Then another angry person commented, “Wow I just lost so much respect for you both. Won’t follow you anymore. There’s so much hatred in your heart. Kinda ironic huh? Peace out ✌🏼.”

“Wow!! Disgusting!! Rich people have nothing to worry about. Way to keep it classy!! I’m not a Biden fan but I’ll pray for him to do his best!! We should all stand together and be united! This is so distasteful!”

Another fan who went off John Legend and Chrissy Teigen noted, “I’m always for…sharing your own opinions, and I love you guys. But I think this is a little too much…especially tagging the whole family. Ever Hear of win with dignity?”