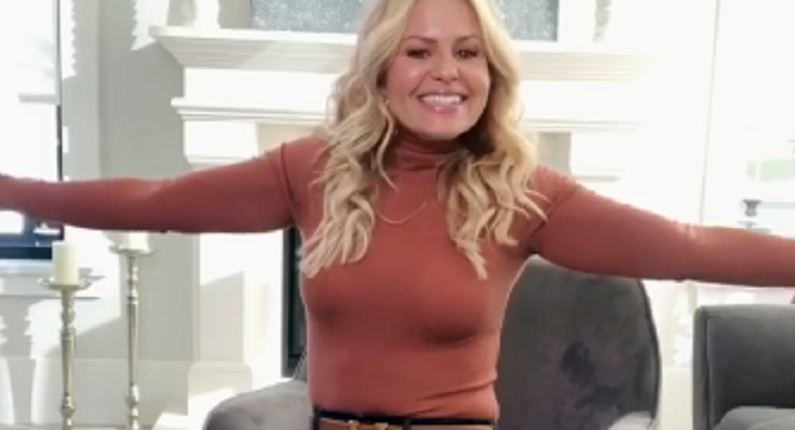 Fuller House star Candace Cameron Bure says her family was “approached” to do a reality show about their lives. But she turned it down. In a new interview, Candace revealed why she and her family aren’t the right fit for reality TV. It doesn’t look like she’ll end up on a Real Housewives franchise anytime soon.

She thinks her family is too “boring” for reality TV

The 44-year-old actress spoke to Us Weekly about ending up on reality television. Candace Cameron Bure joked that no one would tune into their show.

“I don’t think we’re interesting enough to have a reality show around us,” she said. “I think we’re pretty boring.”

However, that hasn’t stopped producers from passing the idea onto her before.

“We were approached for reality [TV], but a long time ago and it was just wasn’t something that works for us,” Candace explained. “I’ve never been approached for Housewives [or] anything, nor have I ever seen a Housewives show. [I] don’t think that one’s for me.”

The Hallmark Channel actress married hockey player Valeri Bure in June 1996. Her Full House co-star Dave Coulier introduced them at a charity sports event. The couple now has three children – Natasha, 22, and sons Lev, 20, and Maksim, 18. Candace revealed that their family made the most of this difficult time.

“It totally tested us, but in the best of ways,” the Dancing With the Stars Season 18 alum said. “I’ll be honest because we try. We both travel so much. So we were like, ‘This might be the most amount of time we’ve actually spent together in years. This is either going to make us or break us.’ And you know what? It’s made us.”

Candace says the quality time allowed the couple to reevaluate their relationship. As TV Shows Ace previously reported, the couple faced backlash for a picture she shared on social media. In the photo, Val’s hand rested on her breast. The Christmas Town actress is not bothered by the criticism.

“It made me laugh because I wasn’t trying to make a statement,” Candace explained. “This is just how my husband and I are. You know, we adore each other and we still have fun and we’re spicy together.”

Candace Cameron Bure also celebrated Lev Bure’s engagement. She’s not even thinking about the wedding vows. She told Us Weekly that she’s more concerned about him having babies. The former child star just “can’t wait” to become a “hot grandma” one day.

“It’s so exciting to me,” she gushed. “I can’t wait until the day I do become a grandma, whether that’s a few years or five years or 10, whatever … I love children.”

But for now, the Aurora Teagarden Mysteries star hopes to become “the best mother-in-law in town” when her son marries his fiancé, Taylor Hutchison. She doesn’t want to get in their way when it comes to their future together. Instead, Candace will be as supportive of the young couple as possible.

Would you like to see Candace and her family on a reality show? Share your thoughts below in the comments section.