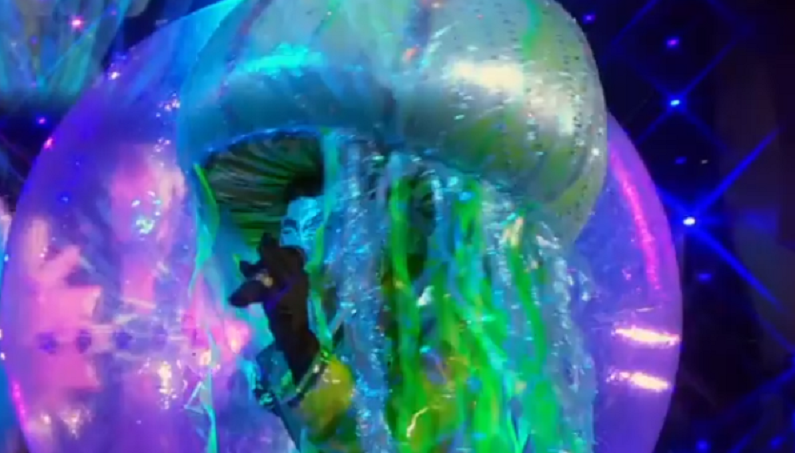 The Masked Singer Season 4 still has fans guessing. They want to know who the famous faces are underneath the masks. Sometimes the unveiling is the most exciting part of the show. On Wednesday night, November 4, the contestants in Group C returned to compete once again.

This group includes the Broccoli, Jellyfish, Mushroom, and Squiggly Monster. Out of this group, people want to know who’s inside the Jellyfish costume. Last week, she brought the house down with her version of “Big Girls Don’t Cry” by Fergie. This week, she captivated the audience with her rendition of “Crazy” by Patsy Cline.

Who do fans think the Jellyfish is?

As great as her performance was, it didn’t make it easy for the judges to guess who’s under the neon costume. When she first performed on The Masked Singer last week, the panelists assumed she was a young celebrity. Robin Thicke assumed it was gymnast Gabby Douglas. Ken Jeong guessed Awkwafina or Chloe Grace Moretz, while Jenny McCarthy said she got Sofia Richie vibes from the clue package.

However, the contributing team at Gold Derby is convinced that the Jellyfish is Chloe Kim. Who is she? She’s the youngest-ever Olympic gold medal winner in snowboarding. She graced the cover of Time magazine’s list of “100 Most Influential People of 2018.” It’s not unlike The Masked Singer to have an Olympic gold medalist on its show.

The Jellyfish loves warm water while being cold-blooded and competitive. When she said “Brrr,” an image of powder (a.k.a. snow) had some fans thinking she meant winter. The Jellyfish costume shows that the contestant is very athletic. The Jellyfish wore a tiara, which she swapped out for “glowjella,” which Chloe has attended in the past.

Some viewers are convinced that the Jellyfish is Paris Jackson. She’s the daughter of legendary pop star Michael Jackson. Following the previous episode of The Masked Singer, she took to her Twitter to respond to the rumors. She noticed her name trending on Twitter shortly after the episode aired.

Even the official Twitter page for The Masked Singer featured a photo of the Jellyfish along with the caption: “Is that you under that green glow, Paris Jackson?” It happened after a few fans assumed that the mystery singer is probably Paris Jackson herself. This led the rumors to circulate on social media, especially after The Masked Singer got involved.

Paris took to Twitter to deny the rumors. She said she would not participate in the singing competition because she’s not private about her music.

“Why do you guys do this every season lol it’s not me, I’m v public about my music and singing,” she tweeted.

why do you guys do this every season lol it’s not me, i’m v public about my music and singing https://t.co/iaR75gGoFZ

And she confirmed that this week. Paris Jackson just dropped a music video for her new song “Let Down.”

Who do you think is the Jellyfish? Sound off below in the comments section.