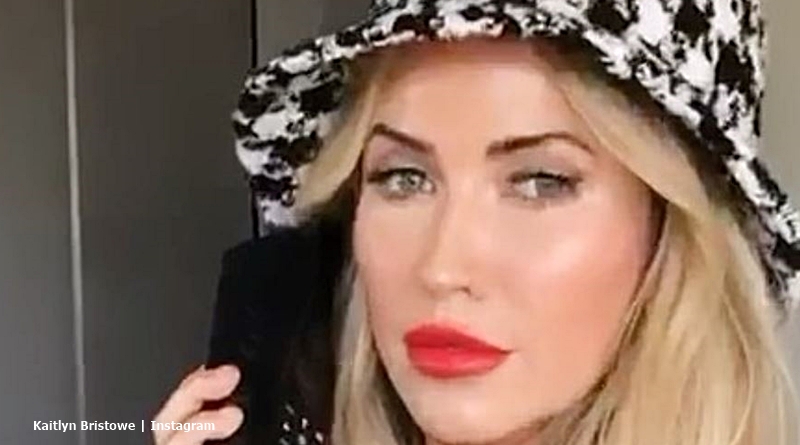 DWTS fans know that Kaitlyn Bristowe sometimes becomes fearful. In fact, she’s open about it on her Instagram. The pressure on the ABC show probably doesn’t help her when coupled with the coronavirus and election stress. Now, she said that she suffers from a lot of anxiety, but focusing on breathing makes her panic more. So, she explained an alternative that works for her.

We reported that Kaitlyn deals with a lot of stress on Dancing with the Stars. She seemed fearful when she did the 80s themed Samba to Justin Bieber’s Sorry. It came because she “fell during rehearsal.” And the following week, she and Artem scored low points from Carrie Ann when she danced as Disney villain Cruella De Vil. In fact, for a second she thought she might go home. And, her face revealed her fear.

The DWTS contestant now explained that much more than dancing brings her stress. In fact, she suffers from full-on anxiety and feels overwhelmed. On some days, she just wakes up feeling terrible from the coronavirus and all this election stress. So, November 5 found her struggling. She tries focusing on breathing but it doesn’t work for her. Interestingly, she finds other things work for her, as suggested by Colt Johnson from TLC’s 90 Day Fiance.

Ways of coping with anxiety other than breathing

We reported that many people hate Colt Johnson from 90 Day Faince. But, he gave some very good advice about coping with anxiety and stress. And, his fans felt very grateful. Now, in a similar fashion, Kaitlyn from Dancing with the Stars reveals she does something similar. Colt suggested, “take a break… and think about something else.” And, Kaitlyn also does that.

In a long post, the DWTS contestant said her anxiety really worried her on Thursday. She wrote, “Anxiety at times interferes with my daily life. Today is one of those days.” Then, she noted that probably lots of other people also stress about “the election, the pandemic, etc.” However, when she tried focusing on “breathing,” it only makes her  “more” aware of the tightness in [her] chest.” So, she tries alternatives.

Read a book, spend time with the pets Kailtyn suggests to her DWTS fans

Like Colt, who turns to his cats, Kaitlyn spends time with her beloved dogs. And, she finds it helps if she focuses on their breathing rather than her own. Then, she might “read a book,” or just feels “the waves of heat and panic.” And, that helps her get through. Next, she asked how other people felt because her days seemed “tough.” Her hashtags included, “#Anxiety #MentalHealth #CheckIn.”

Surprisingly, focusing on breathing also makes it worse for some DWTS fans. One said, “Focusing on my breathing makes me hyperventilate and I start focusing on my heartbeat which makes me more anxious.” But, they also find that reading a bit or talking helps. And, another person thanked Kaitlyn. They wrote, “thanks for verbalizing this! I didn’t realize so many others struggled worse with the breathing thing when facing anxiety.” 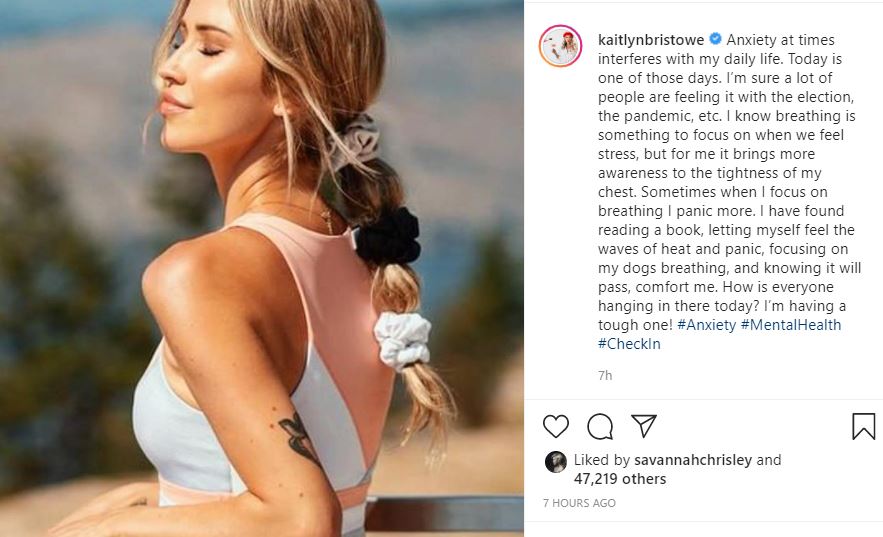 Healthline suggests other ways of coping with anxiety. While they also mention breathing, the website suggests aromatherapy. Plus, they mention walking, yoga, and writing might also help.

Like the DWTS contestant, do you also struggle with breathing focus? What else do you do to help with anxiety? Sound off in the comments below.