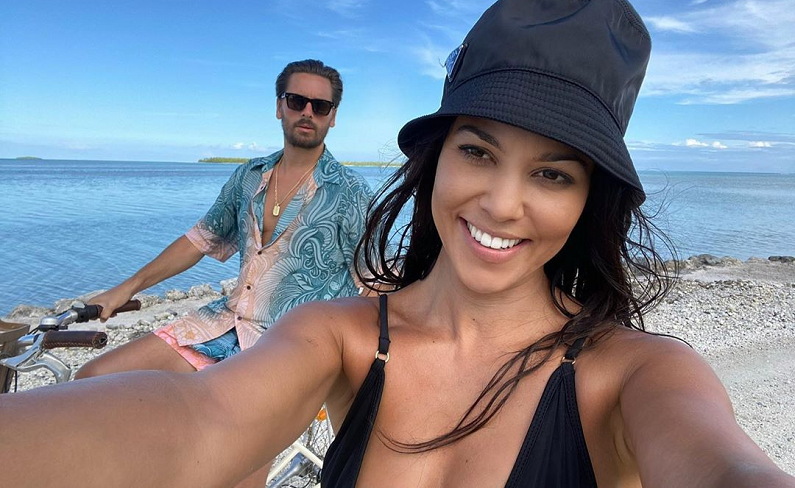 Kourtney Kardashian shared the coziest photo with ex-boyfriend Scott Disick. Meanwhile, fans are hoping they will get back together. The couple has been sparking reconciliation rumors with their sightings and Instagram posts. On Wednesday, November 4, the Keeping Up With the Kardashians star posted a throwback photo of herself with Scott on her Instagram Story.

This led fans to think that they could get back together. Some of them even claim that the former flames are “soulmates.” Kourtney’s latest post comes after the two were spotted together at Kim Kardashian’s 40th birthday vacation. Scott and Kourtney got away from the big group to go on a bike ride together.

The Poosh founder took to her Instagram Story to share a throwback photo of herself with Scott Disick. In the photo, the two looked as if they were dressed for prom. Kourtney Kardashian wore a sexy red evening gown. Meanwhile, Scott had on a black pinstripe suit with a gold chain and Hermes belt.

He also had his arm around her ample booty. The couple looked happy and in love at the time of the photo. “Wow,” the KUWTK star wrote across the photo. She also tagged Scott’s name. Kourtney began dating Scott when she was 27 years old and he was just 23.

The couple dated from 2006 to 2015. They share three children, Mason, 10, Penelope, 8, and Reign, 5. Despite their rocky relationship, they have a great co-parenting relationship. But Scott and Kourtney have been spending more time together since his split from Sofia Richie in May.

Fans want Kourtney and Scott together

Fans are holding out hope for a reconciliation. They think the reality stars are “meant to be” and are “soulmates.” But an insider told Hollywood Life that the couple doesn’t have any romantic feelings for one another.

“The playful banter they used to have when they were on good terms before their split is back because their friendship is back on solid ground,” the source said.

“They are happy being friends and showing their family that they can coexist,” a second insider added. “They both feel it’s good for their kids to see them get along and do things together.”

Scott is spending time on the dating scene. In October, he was spotted with Bella Banos. Now, he’s making headlines with Lisa Rinna and Harry Hamlin’s daughter Amelia Gray Hamlin. However, a source told Hollywood Life that the two are friends who “run in the same circle.”

Kourtney and Scott’s relationship is “shifting”

Kourtney Kardashian and Scott Disick’s relationship could eventually become romantic. Scott is willing to make it happen. But Kourtney would have to open her heart back up to him again.

“Kourtney and Scott’s relationship has been taken a bit of a shift recently – spending more time together and being more kind with each other,” an insider told Us Weekly. “Scott has always loved Kourtney, and the door is open on his side in case she ever wants to take their relationship back to a romantic place.”

However, Kourtney is unsure if she wants to give him another shot. The couple has been through so much together. The 41-year-old remembers the “bad moments” the most, which is why she’s not budging. While they’re not dating, “their friends think they could get back together,” claims the source.

If Kourtney and Scott were to get back together, then they would keep it a secret from the world. They don’t like that their relationship is “a constant topic” in the media. The insider added that the two will “always have a playful relationship with each other and love for each other.”

What are your thoughts? Do you think Kourtney and Scott will get back together? Sound off below in the comments section.