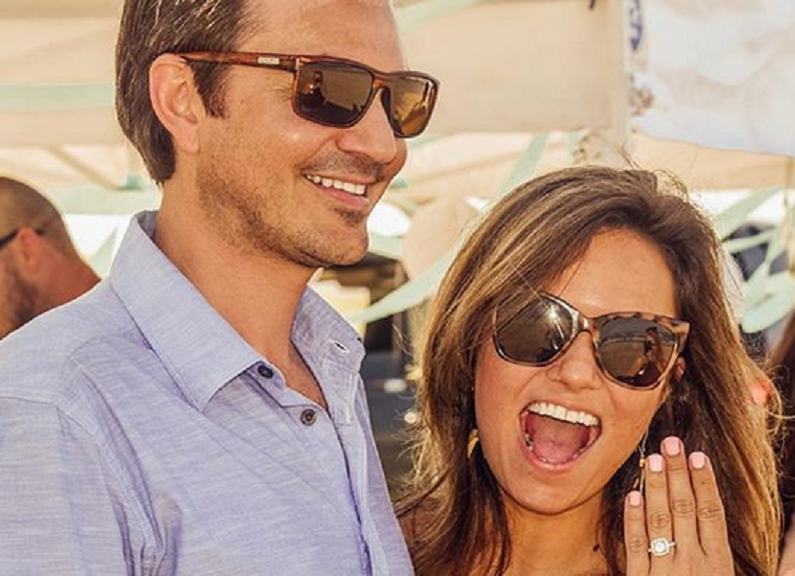 Below Deck alum Amy Johnson is married. The former stewardess and her fiance, Ellis Lenthall, recently wed after their engagement in July. She shared the photos of their engagement over the summer. And now, she just posted a series of wedding photos on Instagram.

The couple had an intimate wedding with friends and family. Amy’s brother, Kelly Johnson, also shared photos on his Instagram Story. On Twitter, he revealed that he played the role of a photographer. Read on to find out the details of Amy’s wedding.

On Friday, November 6, former Below Deck star Kelley Johnson confirmed his sister’s happy news on Instagram. He shared a photo of himself wearing a suit and holding out a camera. “Crazy past two months with work and my sister[‘s] wedding,” he captioned the post. “I still can’t believe my sister is married. Who would have guessed. Life seems to be flashing by.”

Amy responded to Kelley’s post confirming the news. She said that she and her husband have been married for several weeks. “Love this!!!” she wrote. “Can you believe we celebrated our one month this week, crazy??”

Kelley wrote back, “love you sis and so happy for you.” Amy announced her engagement back in July. She took to Instagram to share a series of beautiful photos from the beachside proposal in North Carolina. “It all feels like a dream,” she captioned the photos before adding, “Easiest ‘YES’ of all time!!! I can not wait to be your MRS!!”

Ellis works as a sales representative for Jo-Kell, Inc. in Virginia. He’s worked for the company for the past seven years. Amy previously gushed about her new husband when she attended the Below Deck 100th episode celebration in New York.

“My man,” Amy said. “He’s amazing, he’s a man! And he’s from North Carolina, I mean I have so many great words to say about him.”

Below Deck star isn’t the only Bravo celeb to wed

The former Below Deck star isn’t the only one to surprise her followers with wedding news. So many Bravo celebrities have gotten married this year. Stassi Schroeder from Vanderpump Rules shocked her followers when she posted a video of her wedding. In June, Bravo fired her from the series for her past racist comments and actions. She lost her job alongside former close friend Kristen Doute.

Lauren Wirkus from Summer House also revealed that she planned a wedding amid the pandemic. She only had a small wedding with family and friends in California this past summer. In addition, Kelly Dodd from The Real Housewives of Orange County recently had her wedding to Fox News journalist Rick Levanthal. She had a big bridal shower and traveled to marry him.

Last night we were supposed to get married 👰🏼🤵🏼, but instead went on our first date in NYC since the lockdown. Crazy times in a crazy world makes me appreciate what we have more than ever. I love you @amandabatula_ ❤️ pic.twitter.com/Pw7UblCgqe

However, there are some Bravo stars who are waiting until the pandemic is over to take the next step. Lala Kent and Randall Emmett from Vanderpump Rules have their nuptials on hold. Amanda Batula and Kyle Cooke from Summer House originally planned an autumn wedding, but put their plans on pause as well.

Matt James Reveals Intense Pressure To Choose Black Woman
J. Lo Assassin Action-Thriller ‘The Mother’ on Netflix: What We Know So Far
‘DWTS’ Fans Sour On Matt James — Is His Time Almost Up?
Jana Duggar Gets Close And Comfy With New Guy – Who Is He?
‘Happiness For Beginners’ Adaptation Coming To Netflix With Ellie Kemper